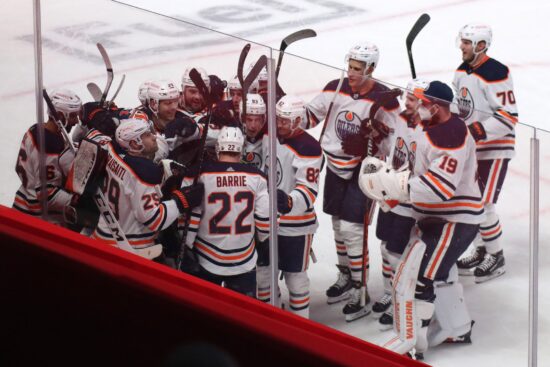 For a while now, Edmonton doesn’t have to worry about the postseason. The Oilers booked their ticket to the 2021 Stanley Cup Playoffs a few weeks ago. Nevertheless, they kept on playing in top gear, winning eight of their past ten games. They would surely like to finish the regular season by winning the Canucks vs. Oilers game this afternoon.

The Edmonton Oilers will square off against the Winnipeg Jets in the first stage of the Stanley Cup Playoffs. Their first duel is on the program next Wednesday, meaning that the Oilers have plenty of time to prepare.

Still, some would think that the Edmonton boss Dave Tippett would want to keep his crucial men off the ice this week. However, he seems to have different plans.

Connor McDavid and Leon Draisaitl are the two skaters who brought the Oilers to the postseason. With them in the team, Edmonton looks super tough. That’s why protecting them from getting injured looks like a priority.

However, rather than giving them a day off, Tippett will probably just manage their minutes. That’s what he’s been doing ever since Edmonton booked a ticket to the playoffs.

The only question is whether he’ll start the attacking duo. Probably not. It would be crazy to give them too much time on ice in a game that literally doesn’t mean anything.

Still, they will probably get to skate for a couple of minutes. By “couple,” I mean probably between 10 and 15, which would be less than how long they played in the game against the Canadiens on Wednesday.

Speaking of that game, Draisaitl spent 21:33 on ice in that game, scoring one and making one assist. McDavid played for 15:12, making two assists along the way. I expect their input to be slightly smaller this afternoon.

The ‘Nucks (Seem to) Have Given Up

One of the reasons why the Oilers don’t need to put a lot of pressure on McDavid and Draisaitl in today’s game is that their opponent looks unmotivated.

The Vancouver Canucks are at the very bottom of the North Division table, and no matter what happens in the rest of the season, they will not qualify for the playoffs.

In fact, they probably aren’t going to lift themselves much higher in the rankings than the #6 place. Even that seems difficult, as they would need to win three of their remaining four games.

Knowing how poor their recent run has been, such a scenario seems unlikely. As a reminder, the Canucks lost their two previous games heavily. First, the Jets destroyed them 5-0; then, the Flames beat them 4-1.

Who wins the Canucks vs. Oilers game tonight

Neither team should be much motivated to win this game, but the fact is that the player quality is on the side of Edmonton. Still, without McDavid and Draisaitl spending much time on the ice, we probably aren’t going to see too many goals.