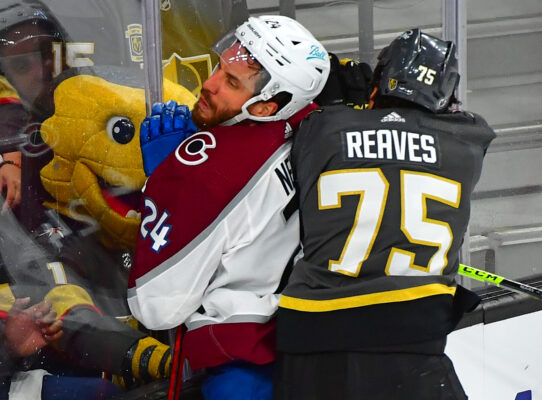 Things have gotten interesting in the division final matchup between the Vegas Golden Knights and the Colorado Avalanche. The Avs looked poised for a possible sweep after scoring 10 goals in taking a 2-0 series lead at home. The Golden Knights defense has buckled down though, winning 3-2 and 5-1 to tie things up heading into game 5 in Denver. Colorado is a -145 favorite in this spot (VGK +125).

Can Vegas Steal One?

The Golden Knights did what they had to do in defending their home ice and tying up the series 2-2. Can they get a win at Ball Arena though? Vegas didn’t look very good in game 1 falling 7-1, but had their chances in game 2 before falling 3-2 in OT.

Perhaps the best thing Vegas can take from their two games at home is the fact that their offense was finally able to get to Colorado goaltender Philipp Grubauer. Jonathan Marchessault has been leading the charge with 4 goals in Vegas including a hat trick on Sunday. Max Pacioretty also had a score in both contests at T-Mobile Arena – but can they do it in Denver?

Vegas looked bad in game 1, but they were also coming off just 1 day of rest after a game 7 win over the Wild. That was also the only contest this postseason that Robin Lehner started in net, and the Golden Knights have looked much better with Marc-Andre Fleury in net the last three. The veteran held the high-powered Colorado offense to just 3 goals in the two games in Vegas.

What Happened to the Avs?

It might be a bit early to push the panic button, as traditionally a series doesn’t truly start until a team loses on their home ice. The collar has definitely gotten a bit tighter for the Avs though, as they thought they would cruise to a series win after their 7-1 domination in game 1.

Colorado has only managed 6 goals in the last three games having to face Fleury in net. Nathan Mackinnon had scored a point in 5 of 6 playoff games for the Avs before being shut out the last two. Gabriel Landeskog had 2 goals in game 1, but has been shut out the last three. Mikko Rantanen didn’t score in game 4, but did have a goal in four straight prior. Colorado obviously needs to get their top line going.

Another question to answer is where Grubauer’s confidence is at? He has just suffered his first two losses of the postseason and was rocked for 5 goals on 35 shots on Sunday in Las Vegas. Getting back to Ball Arena will help, but at the same time the Vegas offense has some momentum after finally getting to the Colorado goaltender.

Who wins the Golden Knights vs Avalanche game tonight:

Is this going to be one of those series’ where the home team wins every contest? It’s definitely looking like it, and Colorado will have 10,000+ rowdy fans in attendance on Tuesday night. That being said, it’s hard to go against Fleury right now, especially with a price of +125.