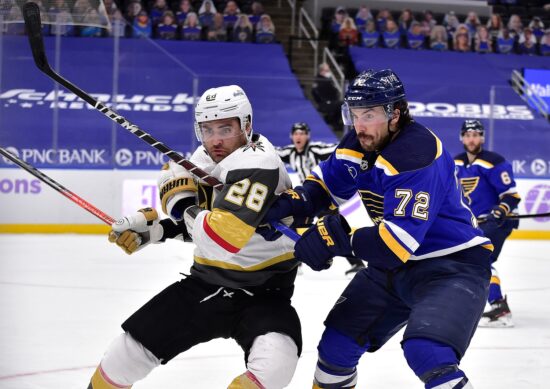 The St. Louis Blues are a hard watch right now, dropping their last seven games. That streak includes a 6-1 loss to the Vegas Golden Knights on Monday, as VGK pushed their record to 4-0-1 vs. the Blues this season. Wednesday’s game leans Vegas yet again with the Golden Knights a -150 favorite, and those odds seem on the low side.

Before it becomes hammer time on the Golden Knights, know that this team had lost three straight prior including a 4-2 home defeat to the Kings as -226 favorites. Vegas was also swept by the Wild last week, scoring a total of three goals in the two game series.

All looks to be back to well and good for Peter DeBoer’s team after a 6-1 win in St. Louis on Monday with a -146 line. Vegas was already up 5-1 midway through the 2nd period powered by a couple scores from Alec Martinez. The Blues had no choice but to pull Ville Husso, meaning Jordan Binnington is all but guaranteed to start Wednesday night’s matchup.

Robin Lehner was great in Monday’s win that was the 4th straight vs. the Blues this season. The Vegas goaltender stopped 31 of 32 St. Louis shots, but that also means it’s Marc Andre-Fleury’s turn to start in the rotation. Fleury has a personal 1-4 stretch going, and was in net in the loss to the Kings allowing 4 goals on 30 shots. Fleury has allowed 4+ in half of his last six starts.

What Happened to St. Louis?

The L’s just keep piling up for the Blues, who have posted just two wins over San Jose in the last month. That’s a 2-12 stretch, and St. Louis is now 10 points back from Minnesota in the West and have just a 14% playoff probability.

Yes, it’s looking like a lost cause season for the Blues. That’s built largely in part on a 4-9-4 record at home this year, giving Vegas even more value while on the road where they are 11-6. Fleury has had his share of struggles in net lately, but St. Louis has also been held to 2 goals or less in each of the 7 games on their current losing streak.

Craig Berube had given Husso the last two starts in net, but will likely be going back to Binnington on Wednesday. Binnington did play well in his last start, holding Colorado to 3 goals on 39 shots in Denver, but once again that St. Louis offense provided no support. The Blues have scored 10 goals total in Binnington’s last 8 starts.

Who wins the Golden Knights vs Blues game tonight:

There’s no reason to think the Blues pull off the upset in this matchup. Their offense is just too horrible right now, and this is a perfect ‘get confident’ spot for Fleury.