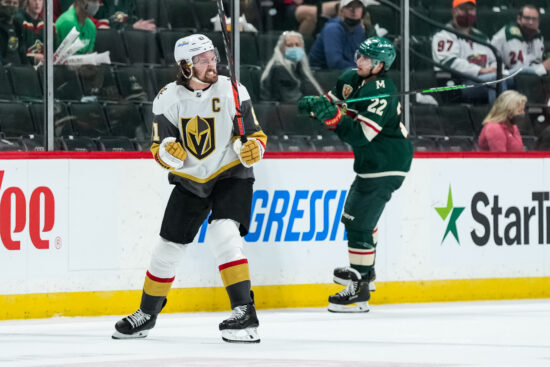 Home ice advantage wasn’t enough on Thursday for the Minnesota Wild. Dean Evason’s team built up a 2-0 lead in the 1st period which should’ve been the clincher at a place where Minnesota was 21-5-2 on the season. The Vegas Golden Knights buckled down though, scoring 5 unanswered goals for a 5-2 win and a 2-1 series lead. That comeback has led Vegas to be a -120 favorite in game four.

The Golden Knights went off on Thursday, taking a 3-2 lead by the end of the 2nd period and putting the Wild away by a final score of 5-2. Vegas dropped series opener 1-0 at home, but was able to even things up with a 3-1 win in game two.

Mark Stone had two goals on Thursday (one an empty netter) and Reilly Smith tallied the go ahead score at 17:33 in the 2nd. What the game three win may have done is demoralized Minnesota goaltender Cam Talbot, who stopped all 42 shots in game one but is showing signs of slowing down after facing another 39 SOG last time out. Vegas is going to keep the pressure on, ranking 4th in the league in SOG during the regular season.

It’s been Marc-Andre Fleury in net all three games so far for Vegas, somewhat surprising since he alternated with Robin Lehner for much of the regular season. Fleury stopped 63 of 65 shots in the first two games of the series, but only had to face 16 SOG in game three, allowing two of them past.

Huge Step Up Game for Wild

Minnesota couldn’t hang on to the lead last time out, and even though there were only 4500 fans in attendance the Wild had been great at xCel Energy Center this season. That includes against Vegas, who Minnesota was 3-0-1 against at home during the regular season.

The Wild have to put more pressure on Fleury in game four, as it’s almost criminal that the Vegas goaltender had to face just 16 shots while Talbot was getting absolutely plastered by 39 pucks. That’s not really how Minnesota operates though, ranking just 28th during the regular season in SOG. They were efficient, getting 3.2 of those shots past (9th), and Joel Erikkson Ek has had a good series with goals in two of three.

One big question is how Talbot’s psyche is doing after being unable to hold on to an early 2-0 lead at home? Make no mistake, his defense isn’t doing the Wild goaltender any favors allowing 42, 28, and 39 shots over three games. Talbot allowed 3 goals on those 28 shots in game two, and has a sub .900 save percentage the last two.

Who wins the Golden Knights vs Wild game tonight:

Minnesota was solid against Vegas during the regular season, going 5-1-2 head to head in the series. It looks like the Golden Knights have turned things up in the playoffs though, and have great value at -120 in this spot.