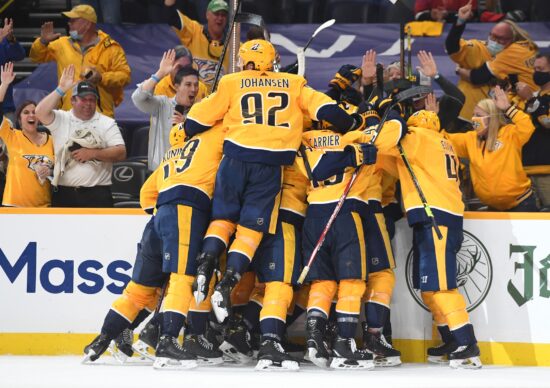 The team from North Carolina won eight of the ten Hurricanes vs. Predators played in 2021. Their most recent duel, however, was won by the Tennessee franchise. It happened two days ago, and the Predators hope they could do the same this afternoon. If they do it, they’re going to level the series to 2-2. Unfortunately for them, the Hurricanes have their say in this as well.

After losing two games in North Carolina, the Predators got themselves a win at home. On Friday evening, there were more than 12,000 fans in the stands of Bridgestone Arena, most of whom cheered on the Predators.

And they definitely needed that! When Pesce scored the equalizer for the Hurricanes in the 17th minute of the third period, the Predators probably didn’t feel good about themselves.

However, their fans cheered them on, helping them get an overtime win after almost 35 minutes of overtime.

Up to 12,135 will be in attendance once again, which could help the Preds level the series. What’s giving them hope that they can do it is the fact that they won the three previous Hurricanes vs. Predators duels played in Tennessee.

Each of those three games had fans in attendance. In the other two games played in 2021 at Bridgestone Arena, there was no crowd allowed.
And guess what – the Predators lost both of those!

The Hurricanes Need to Straighten Out Their Defense

In the regular season, the Hurricanes conceded only 136 goals in 56 games. Only two other teams in the entire NHL conceded fewer goals, namely the Golden Knights (124) and the Avalanche (133).

They continued playing well in the two games of the Stanley Cup Playoffs, allowing only two goals in Game 1. More impressively, they got a shutout win over the Preds in Game 2. So, why did they concede five goals in Game 3?

The reason is obvious – the Predators attacked their goal with all they had!

Considering how determinate the Preds seemed in that game, it’s actually surprising that the Hurricanes managed to take the game to overtime. By doing that, they showed that player quality is on their side.

What wasn’t on their side is luck. Even though they had one goal attempt more in the overtime, the opponents ended up finding the net. This afternoon, however, it could be the other way around.

With their fans to support them, the Predators look very dangerous. Still, the Hurricanes are the better team. They were unlucky to lose on Friday, but this time, they should be able to extend their lead to 3-1 in the series.