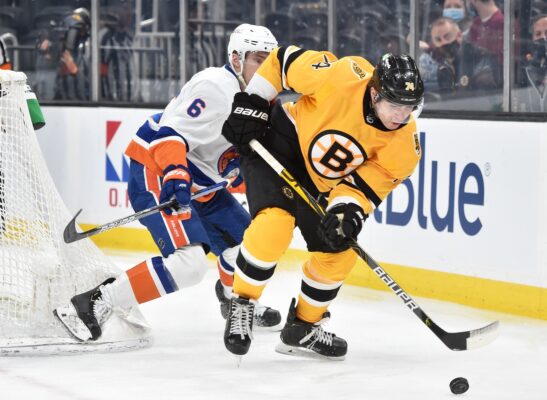 The Boston Bruins lifted a huge monkey off their back as they were able to get their first win over the New York Islanders in six tries, 4-1 on Thursday night. Now the two teams get set for the short turnaround, meeting up against at TD Garden on Friday with the Bruins -120 favorites.

Islanders Get the Goaltending Edge?

Goaltender depth is usually the driving factor to which teams have success on the short turnaround. That puts the Islanders in a good spot as +100 underdogs with Ilya Sorokin set to man the crease. Barry Trotz has used an alternating goaltender strategy over the last 7 games, and it was Semyon Varlamov in net giving up 3 goals on Thursday night, but on a dizzying 44 SOG.

Sorokin has been on a roll though, going 11-3-1 with a 2.17 GAA on the year. It may not matter if Billy Smith in his prime was between the pipes the way the Boston offense is playing lately, but Sorokin has allowed 2 goals or less in 6 of his last 7 starts. The Islanders have picked up a win in 11 of Sorokin’s last 12 starts.

We didn’t see much from the Islanders offense on Thursday night, managing just 23 shots against Boston goaltender Tuukka Rask who had only played one period of hockey since March 7th. It’s the third time in the last five games that NYI has been held to a single goal.

Who Goes in Net for Boston

The return of Rask definitely gives the Bruins some goaltending depth moving forward, but it also raises the question of which rookie gets the nod on Friday in the short turnaround? The good news is, either Jeremy Swayman or Dan Vladar gives Boston a good chance against this Islanders offense.

It will likely be Swayman, who had started four of five games prior to Rask coming off the injury report. The rookie will be playing in just his 5th NHL game on Friday, but has posted a 2.22 GAA and held three of four opponents to two goals or less. Vladar allowed 8 goals on 33 shots to the Capitals in his last start, although Boston was playing on the back to back.

What’s positive for Bruins backers is that their offense can give whoever starts in net some solid support. Brad Marchand had two more goals on Thursday night, and is now tied with Nathan Mackinnon for the most points in the league over the last two weeks (13). Craig Smith also added a PP goal and Patrice Bergeron had a helper. Both of those players are in the top 20 in points the last two weeks.

Who wins the Islanders vs Bruins game tonight:

One thing about the Islanders having a 5-0 record vs. the Bruins prior to Thursday’s loss is that four of those games were played at Nassau. That means Boston could easily win this one back at home (the other loss was in OT) or New York could get the win with their likely goaltending edge. With Sorokin in net but the Islanders offense struggling, low scoring is the way to play this one.