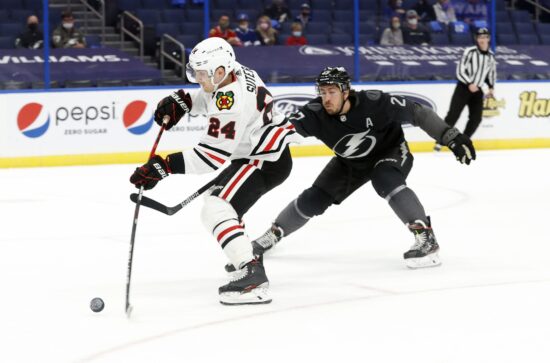 Two teams with much different plans for May meet up when the Tampa Bay Lightning visit the Chicago Blackhawks. Tampa Bay is prepping for the postseason and the rigors that come with a Stanley Cup title defense, while Chicago is inching closer and closer to playoff elimination. TB has had some slip-up games over the last couple weeks, but are still a -185 road favorite (CHI +165).

Lightning Have Dominated This Series

Tampa Bay is 4-0-1 against Chicago this season, scoring a point in each of their five matchups. That started right away with the first series of the year with Tampa Bay tallying a 5-1 and then a 5-2 victory. The Lightning did go to OT in two of their three previous meetings at the United Center however.

Tampa Bay comes in to this one streaking in the right direction, going 4-2 over their last six with the losses coming in series splits against 1st place Carolina and 2nd place Florida. Their offense has only scored more than 3 goals once in the last seven games, but they’ve also been playing without Steven Stamkos (back) since early April.

Both of those recent losses did come with Andrei Vasilevskiy in net though. The stalwart goaltender has looked human at times lately, allowing 3+ goals in three of his last four starts. That includes giving up 4 scores on 31 SOG to Florida on April 17th. Vasilevskiy still has a very solid 2.10 GAA and .928 SV PCT however.

The Blackhawks showed some signs of spark in 2021, but that was mostly early in the season. They’ve dropped 3 of 5 down the stretch in what are essentially must win games, and elimination is imminent as Chicago is 7 points back from 4th place Nashville with just 8 games to play – and they’d still have to jump Dallas.

Chicago still has big offensive potential, as they’ve put up 4+ goals in each of their past four wins. Interestingly enough it’s been Vinnie Hinostroza leading the way with scores in back to back games and a 3 assist game in a win over the Red Wings 10 days ago. Patrick Kane has just one goal in his last 8 games and Alex Debrincat has been completely held out of the scoring sheet the last two.

One bright spot for the ‘Hawks in this disappointing season is that they seem to have found a goaltender. Kevin Lankinen may not start on Tuesday as Malcolm Subban has taken 3 of the last 4, but Lankinen had a solid rookie season. Subban has allowed 7 goals the last two though.

Who wins the Blue Jackets vs Lightning game tonight:

The good news for Chicago is that they’ve had the last three nights off – but that’s about it.

The Tampa Bay offense is going to get to Subban, but don’t be surprised if Chicago sneaks a few in on Vasilevskiy as well.