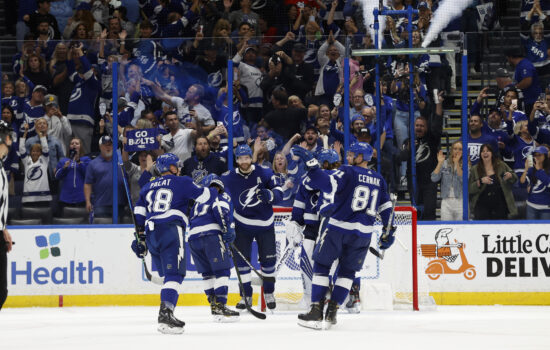 It’s possibly closeout time for the Tampa Bay Lightning as they take a 3-1 division finals series lead into a meeting with the Carolina Hurricanes on Tuesday night. Tampa Bay won games 1 and 2 at PNC Arena both by the score of 2-1, so the defending Stanley Cup Champions have some nice value at -125 for this game 5 matchup.

The Lightning could be resting right now, but dropped a 3-2 OT decision in game 3 at Amalie Arena. Tampa Bay was 21-7-0 at home this season, but the momentum was short-lived for the Hurricanes who fell 6-4 on Saturday to put them in a do-or-die situation in game 5.

The Tampa Bay offense had been held to 2 goals in each of the first three games and still took a 2-1 series lead into Saturday’s tilt. Are the 6 goals scored in game 4 a sign of things to come for this Lightning squad that was 8th in the league in scoring during the regular season? Brayden Point, Steven Stamkos, and Nikita Kucherov, all had goals last time out, so the big dogs are starting to bark for TB.

Home Ice The Cure for Carolina

The Hurricanes were able to get this series back to their own ice thanks to the OT win last Thursday. Jordan Staal was the game saver with a PP goal 5:57 into the extra period in that tilt, giving Carolina at least a chance to creep back into this matchup.

Even though they lost the first two games at PNC Arena this round, being back at home is huge for Carolina (+105) on Tuesday. Rod Brind’Amour’s team scored points in 25 of 28 contests on their own ice during the regular season, and outscored Nashville 11-4 at home in three first round wins. If they can do it against the defending champs remains a question however.

Another question is what the ‘Canes will do in net for game 5. Petr Mrazek started both games in Tampa Bay, helping Carolina to the game 3 win by stopping 35 of 37 shots. The team is expected to turn back to Alex Nedeljkovic however, as he only gave up 4 goals despite taking the L in games 1 and 2.

Who wins this Lightning vs Hurricanes game tonight:

Can Carolina extend the series? They dropped both games at home so far in this round, but gained some confidence by getting the game 3 win in Tampa Bay. You have to think that win helped the team relax a bit, allowing to at least get them to a game 6.