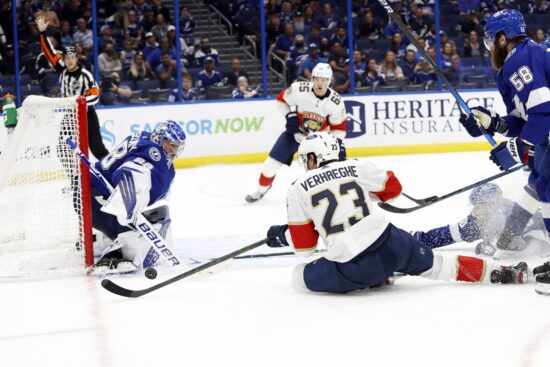 The Florida Panthers need a win tonight to keep their playoff dream alive. They will have up to 9,646 fans to cheer them on. The trouble is that the reigning Stanley Cup champions seem determined to finish the job today. The Lightning lead the series 3-1, with their most recent win happening on Saturday afternoon. They destroyed the Panthers 6-2 in that game.

The Lightning vs. Panthers series started with two straight wins for Tampa. Both of those games were played in BB&T Center. From there, the series moved to the home arena of the Lightning, where they lost Game 3 in overtime.

Their most recent game saw the Lightning getting a big win. The final score was 6-2, in a game in which the 2020 Stanley Cup winners had fewer chances than the opponent. Florida got two goals from power play in that game, even though they had 41 goal attempts (15 more than Tampa).

Tampa’s defense did a very good job in that game. If they could do the same tonight, a win is guaranteed. Scoring against the Panthers should not be a big problem – the Lightning failed to score against this opponent only once since 2019.

Furthermore, the Lightning have been sensational in the offense this whole year, scoring 181 times in 56 regular-season games. Only one team scored more – the Florida Panthers (189 goals).

Panthers Putting their Hopes in Their Attack

Only four teams in the entire NHL scored more goals than the Florida Panthers in the regular season. They continued scoring a lot in the playoffs, with a total of 13 goals in the four Lightning vs. Panthers matchups.

Unfortunately for them, the Lightning scored even more. Nevertheless, the Panthers are confident in their offense. They didn’t do too well two days ago, but this time, it’s all or nothing. Not winning this game would mean the end of their playoff adventure.

The good news for them is that they’re playing in front of their fans. Although they lost both of their previous home games, they have every right to hope for a good result tonight.

Who wins the Lightning vs. Panthers game today

The Panthers had more goal attempts than the Lightning in their previous clash, but only two of those went in. This time, it should be different. With the help of their fans, the Panthers should be able to take the series to Game 5.

Of course, it’s not going to be easy, especially knowing how good the Lightning have been in the offense lately. This is why betting on a high number of goals seems like a better option.