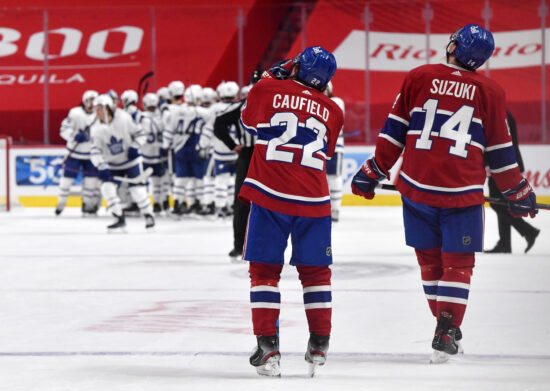 The Montreal Canadiens pulled off one of the more surprising wins of the postseason, taking game one in their series with the Toronto Maple Leafs by a score of 2-1. That was a nice wake-up call for Toronto, who has bounced back with two straight wins to take a 2-1 series lead. The teams have to do some making up in this series, so Tuesday’s game 4 will be played on the back to back, with the Leafs winning 2-1 in Montreal on Monday night.

Overall it hasn’t been a very pretty series for the high flying Toronto offense. The Leafs were 6th in scoring during the regular season, but have been pretty contained aside from a 5-1 win in game two. Toronto lost game one 2-1, and then squeaked out their own 2-1 win on Monday night.

It’s been William Nylander powering the Toronto offense so far this series, as he leads the team with 3 goals. Nylander has been picking up the pace after the Maple Leafs likely lost John Tavares until the next round after he suffered a concussion and knee injury in game one. Auston Matthews and Mitch Marner have also been relatively quiet, combining for just 1 goal so far.

It’s going to be interesting how both teams approach the goaltending situation on Tuesday night. Starting net minders usually sit on 0 days rest, but the postseason is do or die, especially for the Canadiens who don’t want to go down 3-1 heading back to Toronto.

Can Montreal Find Their Offense?

The Canadiens can still head back to Toronto with a 2-2 series tie, which would seem like a minor miracle the way this team played down the stretch. Montreal definitely limped into the playoffs, losing their last five of the regular season.

The Canadiens offense has been virtually nonexistent this series, managing just 4 total goals. Joel Armia and Tyler Toffoli lead the team with a mere 2 points so far in three games with Toronto. The Canadiens could a break if Toronto rests goaltender Jack Campbell on the back to back, as he has stopped 78 of 82 SOG this series, giving up just 1.35 goals/game.

Of course the back to back also means that Carey Price goes on 0 days rest, and the 33-year-old is the confirmed starter for game 4. Price had a rough game 2, giving up 4 goals on 33 shots. He’s done about as good as you can ask in the other two contests though, allowing 3 scores on 65 shots in games one and three.

Who wins the Maple Leafs vs Canadiens game tonight:

It seems like only a matter of time before Matthews and/or Marner have their breakout game, which could very well be coming against a Canadiens defense playing on 0 days rest.