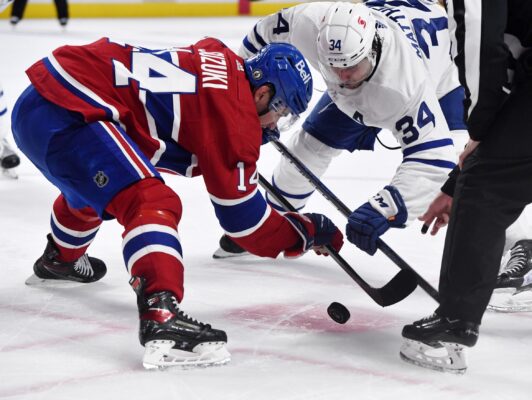 The Maple Leafs had a good chance to book the ticket to the North Division Final on Thursday evening. They lost in overtime that night but now have another chance to finish the job. They’re favored to do so, but it’s going to be even more difficult than before because fans are back in the stands, ready to cheer on the Canadiens to Game 7.

The Maple Leafs vs. Canadiens game is going to be the first NHL game in Canada to have fans in the stands since the start of the pandemic.

The Quebec Government has started relaxing COVID regulations, although things aren’t yet 100% back to normal. Only about 2,500 fans will be allowed in tonight.

The good news for the Canadiens is that a huge majority of those fans will be rooting for them. And they’re going to need it!

Support from the stands is likely to help the Canadiens against their fiercest rivals. Still, the question is whether that’s going to be enough? The fact is that the Maple Leafs are a better team, as evident from the fact that they finished the regular season at the top of the North Division table. The Canadiens finished in the #4 place.

The Leafs Have Player Quality on Their Side

Their captain John Tavares remains sidelined after suffering a horrible head injury in Game 1 of the Maple Leafs vs. Canadiens series. However, he could be making his comeback in a week or two, as long as his team stays in the Stanley Cup Playoffs.

They surely look capable of doing so. In fact, losing the previous game came as a surprise to many, including oddsmakers who were giving the Leafs the role of the favorite before the game. Speaking of odds, the Toronto team is still one of the top candidates for winning the 2021 Stanley Cup at +650.

No surprise there, as this team has plenty of quality on the roster. Aside from their captain, practically all of the Leafs players are fit and ready for tonight’s game. This includes Toronto’s best player and their scoring leader, Auston Matthews.

The reason why he’s likely to be in the spotlight is that he’s scored only one goal in the five Maple Leafs vs. Canadiens matchups of the 2021 Playoffs. That’s way below his standards, considering that he scored 42 times in the 57 games of the regular season. If there’s the right time for Matthews to get back onto the scoresheet, it’s now!

Who wins the Maple Leafs vs. Canadiens game tonight

The Maple Leafs have better players than the Canadiens, but winning tonight isn’t going to be easy, particularly for the fact that there’s going to be a crowd at Bell Centre, with practically everyone cheering for the home team.