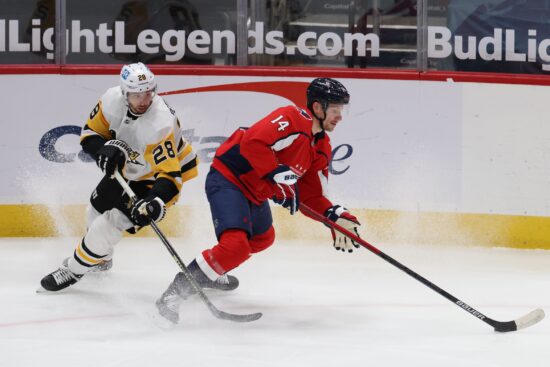 The game of the night for Thursday’s NHL slate has to be the Pittsburgh Penguins traveling to face the Washington Capitals. The Caps’ hold a slight 1 point lead over Pittsburgh in the jam-packed East, the only division where a team hasn’t yet clinched a postseason berth. Washington has won three in a row and is at home, but this one is still listed as a toss-up game with both teams priced at -110.

The Penguins come into Thursday’s tilt off a 3-1 home loss to Boston. Pittsburgh was actually able to get a split of the two game series with the 4th place Bruins despite scoring just two goals in two games. The offense had looked good before the matchups with Boston scoring 16 goals in the previous three contests – but they were all against the woeful Devils.

Pittsburgh has scored a point in 8 of their last 10 games, but seven of those were against either Buffalo or New Jersey – two of the worst teams in the East if not all of hockey. The Penguins still have the #3 scoring offense in the league, but the only problem with that is Washington is 2nd. Despite some struggles, Sidney Crosby still has six points in the last five games, while Bryan Rust has five in five.

Oddsmakers aren’t expecting as high scoring of a game as you’d think with a couple of top three offenses squaring off. That’s showing some faith in Pens’ goaltender Tristan Jarry, who is 21-9-2 on the season. Jarry has held opponents to two goals or less in six of the last eight.

Washington has hovered around 1st place in the East for the better part of the season, but they’re also getting hot at the right time of the year coming off a sweep of the 3rd place Islanders. That includes two wins at Nassau, where NYI is now 19-3-3 on the season.

One of the big reasons that Washington is just a -110 toss-up even while playing well against the Islanders and being at home (15-6-2) is because the status of Alex Ovechkin is up in the air. Washington’s 2nd leading scorer has missed the last two games with a lower body injury and is questionable for the Pittsburgh matchup. Of course the Caps’ also won both of the recent games he’s missed, including a 6-3 offensive outburst vs. the Islanders on Saturday.

The Capitals have a chance no matter which of their goaltender-by-committee they decide to go with. Vitek Vanecek had a shutout of the Islanders in his last start, while Ilya Samsonov kicked off the three game set with New York with a SO.

The Capitals are 1-3 at Pittsburgh this season, and split the two previous games that were in Washington. The teams haven’t met in two months, but the Penguins haven’t shown they can be productive against anybody besides Buffalo and New Jersey over the last couple weeks.