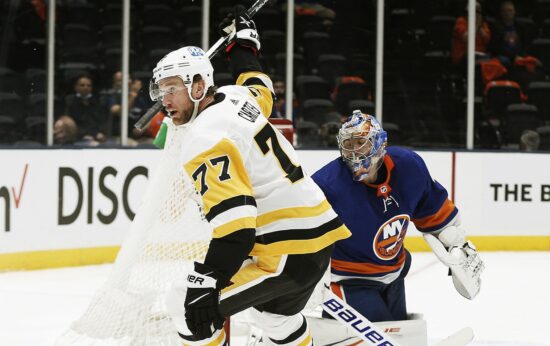 The Pittsburgh Penguins and New York Islanders meet up on Saturday afternoon for Game 4 of their best-of-seven series in the East Division. Pittsburgh currently has a 2-1 series lead after winning two straight games over the Islanders.

New York is the number four seed in the East Division, but they came out of the gates strong with an impressive win in the series opener. Pittsburgh is the top seed in the East, and they have looked like that team in the last two games.

Pittsburgh is looking to take a commanding 3-1 series lead, but New York is hoping to keep the pressure on the Penguins by picking up a win in Game 4 at home.

Pittsburgh scored 3.45 goals per game during the regular season, and the Penguins were able to find offense in the Game 3 win. The Penguins are still led by Sidney Crosby, but this team has a number of players that can step up on offense.

The Penguins are scoring on 24 percent of their power-play chances, and they have also been a great team on the penalty kill. Special teams play a role in the playoffs, and that is why the Penguins are a tough team to beat.

Islanders Know How to Defend

The New York Islanders can’t score goals as easily as Pittsburgh, but they are one of the best teams in the league at defending their own net. The Islanders allowed just 2.23 goals per game this season, and that needs to be their focus in Game 4 of the series.

Mathew Barzal has led this team with 45 points during the year, and there are some other solid offensive players. New York has been able to find offense when needed, but they need to get back to their winning style of play.

The team that is able to establish the tempo in this game will ultimately be the winner, and the Islanders have done a great job of that at home. New York did not play their best game on Thursday night, and they should come out with a better effort in this one.

Look for the Islanders to slow things down on Saturday as they frustrate the Penguins and keep them off the board.

Who will win the Penguins vs. Islanders game

New York will find a way to slow down the pace in this game, and that will allow them to take advantage. Pittsburgh wants to win games by scoring goals, but that just won’t happen in this one.

The Islanders score a late goal to win Game 4 and even up the best-of-seven series.