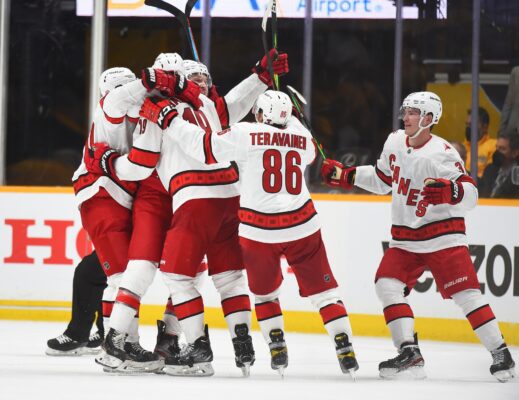 Game 5 of the best of 7 series between the Carolina Hurricanes and Nashville Predators will take place on Tuesday. What a wild series it has been so far, with the Hurricanes winning the first two games in relatively easy fashion.

When the series shifted to Nashville, the Predators picked up back-to-back wins, both in overtime. Now, the winner of this game will move to within one game of the final 8 in the quest for Lord Stanley’s Cup. The Carolina Hurricanes, back at home, are huge favorites in this game.

The Carolina Hurricanes do not lack the effort to score. The Hurricanes have attempted 129 shots over the last two games. Head Coach Rod Brind’Amour feels that’s a good thing, and the team “deserves better.” In the Game 4 loss, Brock McGinn scored his first two postseason goals of the season, but it was not enough. During the regular season, McGinn recorded just 13 points for the Hurricanes.

Sebastian Aho was the leading goal scorer for the Hurricanes during the regular season. His 24 goals and 33 assists were far ahead of Incent Trocheck. Aho did not record a point in Game 4 or Game 1 but picked up 5 total points in the middle game. The Hurricanes know if his offense gets going, this team will be hard to slow down.

The fans in Nashville are quickly putting the days of Pekka Rinne behind them. Juuse Saros has been unbelievable thus far for the Predators. 52 saves in Game 3 and 58 in Game 4 is incredible, and the team will need more of that. Saros is 26 years old and was a 4th round pick by the Predators back in 2013. During the regular season, Saros started 35 games and went 21-11-1 with 3 shutouts and allowed 2.28 goals per game.

Luke Kunin was the star of Game 4 with the first goal for the team and then the final goal for the team. His overtime goal evened the series up at 2 games apiece. During the regular season, Kunin had just 10 goals and 9 assists. Roman Josi was the top point scorer for Nashville with 8 goals and 25 assists.

Who wins the Predators vs Hurricanes game tonight

This has arguably been the best series of the first round of the playoffs. The Predators are giving the top-seeded Hurricanes all the way and more. But, with the game back at PNC Arena, despite having the momentum on their side, the Predators are going to fall short. Nashville did not look great in either of the first two games, and something about that arena has them spooked. On the other side, look for a strong, enthusiastic play from Carolina in this game. The Hurricanes win this game at home and move to up 3-2 in the series.