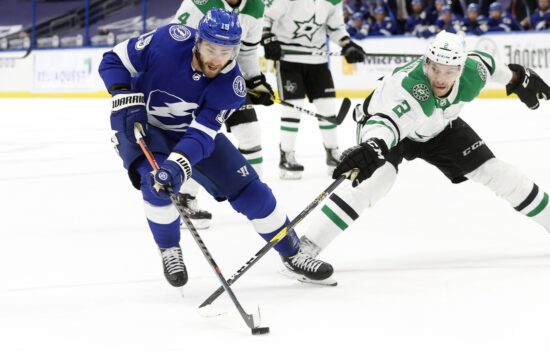 The Dallas Stars aren’t doing themselves any favors in their quest to make the postseason. Dallas has lost five in a row, now trailing the Predators by four points with just three games to go. One of those defeats was to the Tampa Bay Lightning on Wednesday, with TB winning 6-2. The Lightning have won five of six vs. Dallas this season, but are still a moderate -155 favorite on Friday night.

Stars Sputtering Down the Stretch

Dallas had a chance at the postseason, but their probability is just 5.6% now after losing their last five games. The losses came against good teams though, all five were against teams ahead of them in the East including two against Tampa Bay.

The Stars may be deflated about their lost season, it certainly looked that way as Tampa Bay scored on 6 of just 20 shots in Wednesday’s win. The Dallas offense has definitely left them, as they’ve been held to two goals or less in four of their last five games including two shutouts. Jason Robertson is about the only skater contributing right now, scoring 7 points in the last seven games.

Jake Oettinger has gotten the last two starts for Dallas, and has a great chance of being between the pipes on Friday. Oettinger let 4 of 18 shots find the back of the net in Wednesday’s game against Tampa Bay, but has helped the Stars earn points in five of his last eight starts.

The Lightning likely won’t catch Carolina for the top spot in the Central, down 5 points with three to play. TB could very much find themselves in a look ahead game vs. Dallas though, as the Lightning are tied with the Panthers at 75 points and have a two game set in Florida upcoming to close out the regular season.

Tampa Bay has done their part, winning six of their last seven with the only defeat coming in a SO loss to Detroit. The Lightning have value on Friday at -155, as they are 21-6 at home on the season not to mention 5-1 against Dallas on the year.

The Lightning are a top 7 team in both scoring and goals allowed. That defense has started three different goaltenders in the last three games, but will likely go with Andrei Vasilevskiy on Friday. Vasilevskiy is riding a 4-game win streak, and has allowed just two goals in his last two starts.

Who wins the Stars vs Lightning game tonight:

It seems strange that the Lightning are just -155, their lowest price tag in the last eight games. That’s even coming off a dominating 6-2 win over the Stars as -163 favorites. The line dropping means there’s a chance that Vasilevskiy doesn’t start in net for Tampa here. With TB also looking ahead to two games with the Panthers, it’s a great spot for Dallas to steal one.