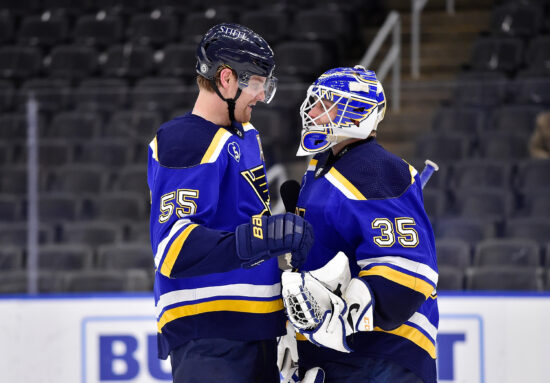 The Minnesota Wild and St. Louis Blues will close out their 2021 regular season by meeting for a 2nd straight night. The Blues captured a 4-0 win on Wednesday as +141 home underdogs, and take the ice at +100 on Thursday night. Minnesota is a -120 favorite in a game that could go either way as both teams rest up for the playoffs.

Minnesota will likely rest some of their starters as they prep for a playoff series that starts off either in Vegas or Colorado. The Wild had outside hopes of a possible 2 seed and home ice, but that ended with Wednesday’s 4-0 loss at the Enterprise Center.

Minnesota had scored points in six straight games prior to Wednesday’s shutout. The Wild couldn’t get any of their 31 shots to find the back of the net, and that was against St. Louis’ backup goaltender Ville Husso. Minnesota was down 4-0 with 7 minutes left in the 2nd period.

Wednesday’s tilt was another rough outing for Cam Talbot, who gave up 4 goals on just 27 shots to St. Louis. Talbot has now allowed 4+ goals in 4 of the last 6, so maybe the Wild have a better chance with backup Kaapo Kahkonen between the pipes. Kahkonen is on a personal 4-game win streak.

Blues Go With Starter in Net

St. Louis won’t have their seeding altered with a win or a loss, as they are locked into the 4 seed set to play whoever wins the West between Colorado and Vegas. The Blues have great value as underdogs, as they have tallied points in 10 of their last 11 games.

The Blues also continued their strong play against Minnesota with Wednesday’s 4-0 win. St. Louis took 2 of 3 in St. Paul at the end of April, and the Wild are one of the best home teams in the league going 21-5-2 this season. St. Louis has taken 5 of the last 6 in the head to head series, and have also won four straight over the Wild at the Enterprise Center.

St. Louis scored Wednesday’s win even with backup Ville Husso in net. That means Jordan Binnington will likely get the nod on the back to back. Binnington has surrendered 2 goals or less in three of his last four starts, but allowed 7 in two starts vs. the Wild a couple weeks ago. Binnington stopped 24 of 25 shots in his last home start vs. Minnesota on April 9th.

Who wins the Wild vs Blues game tonight?

Both teams could be resting some players on Thursday, making this one a toss-up play. In that case, St. Louis at home, and having taken four straight on their own ice vs. the Wild is the route to take.