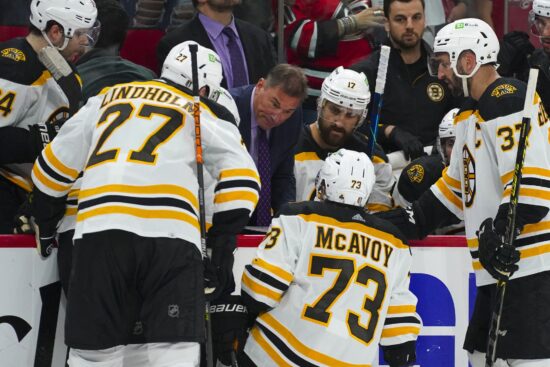 The wait for ice hockey action is finally over, as NHL pre-season games finally get underway this weekend. Several sides will be in action over the weekend, including the Boston Bruins and Philadelphia Flyers, who clash at the Wells Fargo Center Philadelphia on Saturday.

The Boston Bruins would have been slightly disappointed with their efforts during the 2021-22 NHL season, as they crashed out in seven games of the opening round of the playoffs against the Carolina Hurricanes. During the season, they boasted an overall record of 51-28-5 and excelled at home, going 26-12-2.

This looks set to be a historic season for the franchise, as they play in the NHL for the 99th season. However, there is a fresh look to the backroom staff this term, with Jim Montgomery stepping in to replace Bruce Cassidy. Josh Brown was one of the big departures over the summer, but they certainly look in a much stronger place following the arrivals of David Krejci, Connor Carrick, and A. J. Greer.

The Philadelphia Flyers will be looking to go into the new season with some momentum behind them, as they were extremely disappointing throughout the previous season. They ended the campaign with a negative overall record, as they went 25-46-11. Their home record stood at 14-21-6, meaning that they won just three more games at the Wells Fargo Center throughout the season.

Due to that poor record, they missed out on making the playoffs, the first time since 1993-94 that they had missed the post-season in consecutive seasons. Both Alain Vigneault and Mike Yeo were tasked with changing the Flyers’ fortunes last season, but a new man now takes over coaching responsibilities for the new season. John Tortorella brings with him a wealth of previous NHL experience, as he has previously coached the Blue Jackets, Rangers, and the Canucks. Meanwhile, he also led the Tampa Bay Lightning to Stanley Cup glory back in 2004.

The Bruins have won the previous two games between these two sides, and have averaged four goals per game during that period. However, the Flyers came out on top in the previous pre-season home game that they played against the Bruins last season.

Bruins vs Flyers Pick and Prediction

The opening games of pre-season are always very hard to judge, as we know very little about the conditions of both teams. However, we slightly prefer the Flyers on Saturday, as we expect Tortorella to have made an immediate breakthrough with his new team.