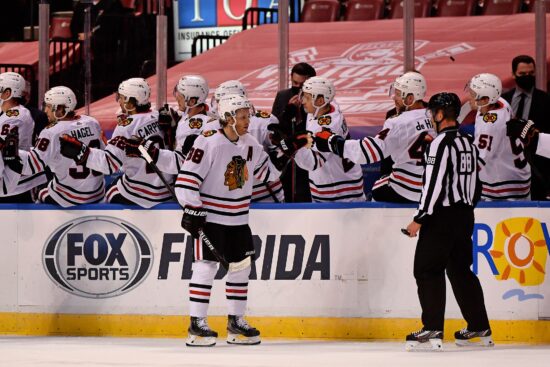 What’s interesting is that in each of their previous four games, the Blackhawks conceded 5 goals. They need to do much better defensively if they want to get a win in the Red Wings vs Blackhawks game. Can they do it? Oddsmakers think so! According to them, Chicago is the favorite to win on Friday evening.

Last season, Detroit won only 13 games. One of those games was the Red Wings vs Blackhawks game. Still, oddsmakers do not think another win for Detroit is going to happen again. The reason is that most people seem to think Chicago is a better team.

However, the Blackhawks haven’t been showing it, at least, not in the four games they’ve played so far this season. Of course, the season has only started a couple of days ago, so they definitely have a chance to improve their form. The road to success starts with a single step, and in this case, the first step is to win the Red Wings vs Blackhawks game.

Of all the teams in the NHL that have played four games so far, the Blackhawks have conceded the most goals. Obviously, many blame the goalie for this. The trouble is that when the Chicago Blackhawks are concerned, it’s not a goalie, but goalies. This team used three different starting goaltenders in the four games they’ve played so far – Malcolm Subban, Collin Delia, and Kevin Lankinen.

Who’s going to be the goalie in the Red Wings vs Blackhawks game remains a question. However, it probably isn’t going to matter much as each of those three goalies has conceded 5 goals per game.

Instead of focusing on the performance of the goaltenders, Chicago’s boss Jeremy Colliton needs to work on making the entire team better in the defense. Luckily for them, this Friday, they’re taking on a team that’s known for its offense.

Decent Start of the Season for Detroit

After four games, the Red Wings have four points. First, they beat the Carolina Hurricanes in a game in which they were +375 underdogs.

Secondly, in the game against the Blue Jackets, they got themselves a win after overtime. In that game too, they were the underdogs. This time, the moneyline odds on the Red Wings were +250.

The first game of the season that the Blackhawks are playing in Chicago is expected to bring some luck to this team. At least, that’s what NHL odds suggest. The Blackhawks are favored to win this game for a reason – they’re not as bad as their recent results might suggest.

Still, they definitely aren’t too good as well. This team is going through a rebuilding process, so we shouldn’t expect them to dominate the NHL this season. However, we can expect them to beat the Detroit Red Wings on Friday.