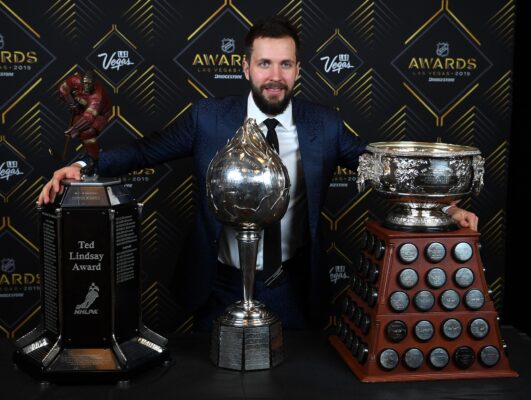 The current favorite to win the Hart Trophy in the 2021-22 regular season is Connor McDavid. The 24-year-old will be playing for the Edmonton Oilers this coming season and will be looking to kick on after winning this award on two previous occasions. He scored 33 goals and made 72 assists in 56 regular season games for the Oilers last season.

Nathan MacKinnon of the Colorado Avalanche is also one of the short-priced selections in the betting markets. The center is a four-time All-Star, and scored 20 goals and made 45 assists for the Avalanche in 48 games last season.

The Jack Adams Award is the award that is handed over to the coach that has performed best throughout the regular season. Rod Brind’Amour won this award last season, as the Carolina Hurricanes won the Central Division, dropping to just 12 defeats and scoring 179 times. The coach is once again among the leading chances this season.

However, the current Vegas favorite is Jon Cooper. Cooper will be leading the two-time Stanley Cup defending champions into the regular season. The Lightning ended the 2020-21 season by winning the illustrious trophy in five against the Montreal Canadiens.

The NHL’s best defensive players will have their sights set on the James Norris Trophy this season. The award has been handed out on 61 occasions, but only 26 different players have won it since the 1953-54 season. A couple of past winners of this award can be found towards the top of the betting. Adam Fox won the James Norris Trophy for the first time last season, and is the second favorite at present.

Victor Hedman has also won the award previously, with his success coming in 2017-18. However, Cale Makar is the defenseman at the top of the betting. The Colorado Avalanche player won the Calder Memorial Trophy in his rookie season, and has progressed into a vital player for the Avalanche.

The most lucrative honor for goaltenders in the NHL is the Vezina Trophy. The general managers of the NHL sides involved in the competition vote for the winner of the famous award.

Marc-Andre Fleury was the most recent winner of this famous award, as he excelled for the Vegas Golden Knights last season. However, Andrei Vasilevskiy of the Tampa Bay Lightning is the clear favorite in the betting to add to his success from the 2018-19 season.