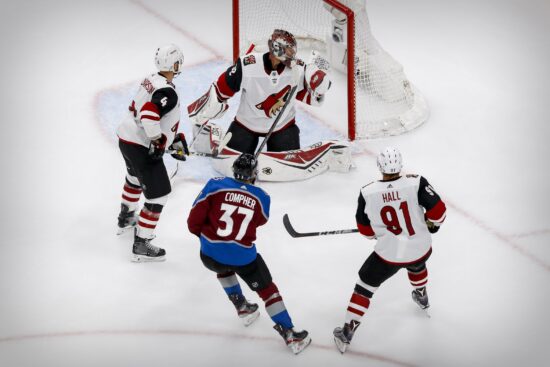 In the previous Sharks vs Coyotes matchup, the team from Arizona was victorious. The game in question was played almost exactly one year ago, when the Arizona Coyotes beat the San Jose Sharks 6-3. A lot has changed since, but the Coyotes are once again the favorites.

Judging by the NHL odds, the Coyotes are more likely to win this game. One of the reasons for this is that the game is played at Gila River Arena, where a majority of 3,450 fans will be cheering for the home team. Another reason is that the Sharks are coming off a pretty unsuccessful season, the first since 2002-03 in which they missed the playoffs. For more reasons, keep reading our Sharks vs Coyotes preview!

The 2019-20 season was pretty strange for both of these teams. The San Jose Sharks will want to forget about it, as it was the first season in 17 years in which they failed to qualify for the Playoffs – they finished at the very bottom of the Western Conference table.

It’s almost the opposite when the Arizona Coyotes are concerned. In 2020, they qualified for the Playoffs for the first time since 2012. After finishing in 11th place in the West, they had to play Playoff Qualifiers against the Nashville Predators. Despite entering the series as the underdog, Arizona cruised past the opponent, winning by 3-1.

From there, they moved to the First Round of the Playoffs, where they lost to the Colorado Avalanche 4-1 in series.

Nick Schmaltz is Back After an Injury

Coyotes’ Nick Schmaltz returned to practice last Sunday after being out due to a head injury. The 24-year-old was their best player in the regular season last year, with 45 points from 70 games (11 goals and 34 assists).

The talented forward lead Arizona to the Playoff Qualification, but didn’t feature in any of the postseason games. The reason for this was a neck injury he sustained in an exhibition game against the Vegas Golden Knights just a few days before the start of the Nashville series.

Another injury kept him out of practice at the start of 2021, but he’s back now. In fact, there are no injury reports in the Arizona roster. Exactly the same goes for San Jose. This means that the Sharks vs Coyotes game will feature the best players from both teams.

Same as in the 2019-20 season, the two goaltenders that will share playing time throughout the 56-game season are Martin Jones and Devyn Dubnyk. But, who’s going to start the Sharks vs Coyotes game?

The answer is: probably Jones. The San Jose coach Bob Boughner seems to be pleased with his performances in the camp. On Sunday, the Sharks had an intra-squad scrimmage, in which the team with Jones as the goalie beat Dubnyk’s team 7-2.

“For me, I think Jonesy, I’m not going to pick a No. 1 guy, but I think he’s put in himself in a real good position to be the starter,”

Boughner speaking about the starting goalie in Sharks vs Coyotes game.

Boughner might be satisfied with Jones, but most NHL coaches do not share his opinion. In fact, in a recent poll, coaches and GMs voted him the second-worst goaltender in the league.

Season openers are always difficult to predict, but the Coyotes look destined to win this game. If not for any other reason (and there are many reasons!), then for the fact that they’re simply a better team than the Sharks.