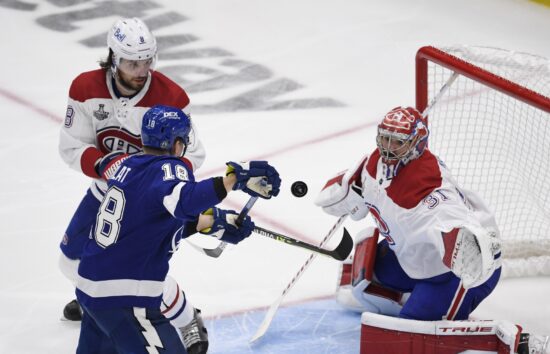 The Montreal Canadiens have some work to do after their 5-1 loss to the Tampa Lightning in game 1 of the Stanley Cup Finals on Monday. The Canadiens looked overmatched, but that’s what experts thought after a 4-1 loss in Las Vegas in game 1 last round before the Habs came back for a 4-2 series win. TB looks comfortable though, -210 favorites on Wednesday as they try to go up 2-0.

Montreal Needs to Calm Down

The Canadiens can be forgiven for playing a little sloppy, appearing in their first Stanley Cup Finals since 1993. That was the last time a team from Canada won the cup, so there may be a little extra pressure on the team for pride of country. It showed in game 1, as the first three Lightning goals came of Montreal turnovers.

What Montreal has shown this postseason is a great job of making adjustments. They were dominated by the Golden Knights in game 1 of the last series, playing in front of a full capacity stadium for the first time this season. The Habs then went on to win 3-2 in game 2, taking back home ice advantage and setting the stage for a series win. Can history repeat itself?

What Montreal will need on Wednesday is a better performance from Carey Price, which normally hasn’t been a question in these playoffs. Price had allowed 2 goals or less in 8 of 9 starts prior, but the Tampa Bay offense looks like a different animal – through one game at least.

Lightning Comfortable In This Spot

Tampa Bay has now won five of their last six Stanley Cup Finals games, and are in a very familiar spot in this high pressure situation. Nikita Kucherov had a couple of 3rd period goals to put game 1 out of reach and Steven Stamkos had a PP goal at 18:50 in the final frame to make ‘over’ 5 bettors very happy.

Kucherov had 3 points total, adding a helper on Stamkos’ score. Kucherov leads the NHL in scoring this postseason, putting his tally up to 30 for the second straight season which is unheard of. TB has the top four scorers in the playoffs altogether and five of the top 6. One of those – Alex Killorn (17 points) went down with a foot injury last game and is questionable for Wednesday.

Andrei Vasilevskiy had a pretty relaxing game 1, turning away 18 of 19 shots from the Habs. It was continued dominance at Amalie Arena for Vasilevskiy, who has now allowed one goal in his last three home starts. The Lightning net minder has given up 5 scores total in his last 5 home starts in the postseason.

Who will win this Canadiens vs Lightning game tonight:

Can Montreal get the bounce back as +180 underdogs? They’ve been resilient all playoffs, and will get a little boost with Joel Armia coming back from the COVID list. Tampa Bay is a beast though, and looked very at ease in the frantic atmosphere of a Stanley Cup Finals game. Ultimately, you look for a better performance from Price that keeps Game 2 lower scoring.