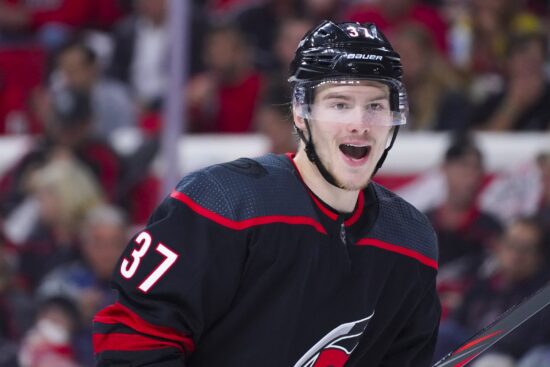 The Carolina Hurricanes will be hoping for a renewed charge towards the Stanley Cup this season, and important business has been done off the ice over the summer to ensure that they stand the best chance of achieving that. Bosses were certainly pleased with the most recent business that has been completed, as Andrei Svechnikov will be staying put in Carolina for the next eight years.

The announcement of the contract extension was announced on Thursday, ahead of the start of the 2021-22 NHL regular season. Don Waddell revealed that terms for an eight-year deal had been agreed with the star. In the announcement, he revealed that the business was especially important, given that the player is a ‘cornerstone’ of the franchise. The deal is reportedly worth an annual salary of $7.75 million, and will run until the conclusion of the 2028-29 season.

Svechnikov has been with the NHL franchise since being selected second overall in the 2018 Draft. He was one of the hottest commodities at the time, and that has been proven during his NHL career to this point. He went on to make his debut in the league in October 2018, as he played in a 2-1 defeat against the New York Islanders. However, he recorded his first assist in an NHL game in the following match, as he played his part in a 3-1 success against the Columbus Blue Jackets.

His progression, and importance, has been clear for all to see when you study his stats. He has played in the NHL for three seasons, and has scored an impressive 59 goals and managed 81 assists in 205 games. His best scoring season to date came in 2019-20, as he scored 24 times and registered 37 assists in 68 games. Svechnikov also scored four times in six playoff games in that season.

How Does It Impact Hurricanes Stanley Cup Odds?

It was a vitally important piece of business conducted by the Hurricanes, as Svechnikov could become their star man when it comes to a Stanley Cup challenge. The eight-year contract that he has signed means that the franchise have room to breathe, and they have the freedom to put together a Stanley Cup-winning team.

The odds currently suggest that they could have a decent chance of being a main player this season. Carolina are currently a +1200 chance to win the prestigious honor, making them the joint fourth favorites. They are also the second favorites to win the Eastern Conference at +700, and favorites for the Metropolitan Division at +375.