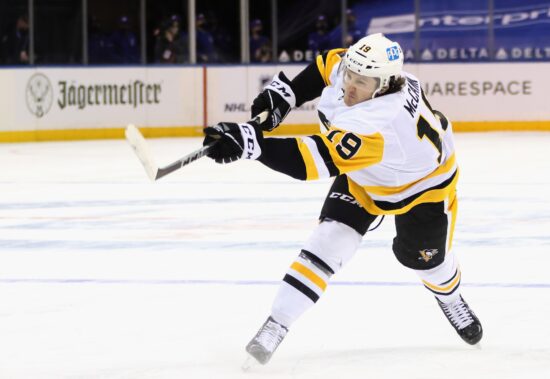 It has been a busy weekend off the ice for the Toronto Maple Leafs, as they look to rebuild following a disappointing end to the NHL season. The Leafs were widely considered to be among the leading contenders to make a strong run towards the Stanley Cup this past season, but eventually fell well short as they were beaten in the opening round by the Montreal Canadiens.

Despite strong performances in the regular season, which led to them finishing first in the North Division, the Leafs faded once again in the playoffs. However, moves have been made early in the summer to ensure that the franchise can learn from the mistakes made, and that could see them enlisted among the favorites for the Stanley Cup next season.

The Toronto Maple Leafs have been able to add Jared McCann to their roster for the coming season, after reaching an agreement with the Pittsburgh Penguins. The Leafs agreed to part ways with Filip Hallander, and a seventh-round pick in the NHL Draft in 2023 to pull off the deal. McCann had signed a new two-year deal with the Penguins in September of last year, worth $5.88 million.

The 25-year-old looks to be an excellent signing for the Leafs, as he has been a consistent player throughout his stay with the Penguins. McCann was picked 24th overall in the 2014 draft by the Vancouver Cannucks, before moving to the Penguins in the 2018-19 season. In his first season with the Penguins, he played 32 times, scoring eleven times and making six assists. He also registered his first assist in the playoffs during that season. In the 2020-21 NHL season, he played 43 times for the Penguins. He scored 14 goals and made 18 assists.

Woll Signed To An Extension, Carbery Brought In

The trade of McCann wasn’t the only move that the Leafs were making over the weekend, as they also tied down Joseph Woll to an extended contract. Woll has been with the Leafs since being drafted at 62nd overall in 2016. He will add some much-needed depth to the goaltender position for the 2021-22 season and signed on a two-way deal. The new deal for Woll is worth $750,000.

Toronto have also added a new assistant coach to their backroom staff for the coming season, as it was revealed that Spencer Carbery would be taking the job. The announcement came from nowhere, as the 39-year-old only recently signed an extension with the Hershey Bears. Carbery’s reputation has increased over the past 12 months, as he led the Bears to a 24-7-2 record.

Most importantly, they allowed just 2.33 goals per game. His defensive record would have been something that would have caught the eye of the Leafs. However, it remains to be seen how much of an impact the most recent winner of the Louis A.R. Pieri Memorial Award will have on the NHL franchise.