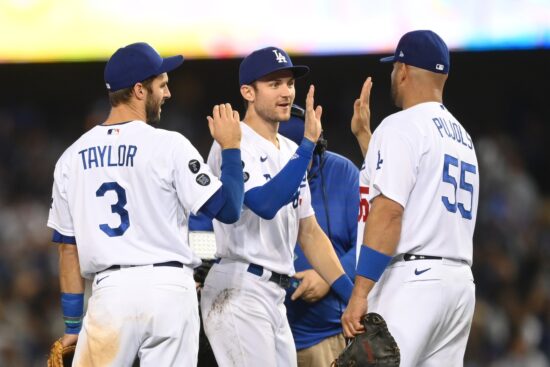 The Atlanta Braves had a chance to close out the NLCS in Los Angeles and give themselves a few days off before facing an American League winner in the World Series, but Chris Taylor and the Los Angeles Dodgers had different plans. The Dodgers had an offensive explosion, outscoring the Braves 11-2 to send this game back to Atlanta for a game six and potentially a game seven.

The Defending Champs Aren’t Done Yet

The Los Angeles Dodgers won their second win or go home elimination game of the 2021 postseason, and will have to win two more just for a World Series berth. The Dodgers offense decided that they wanted to keep playing instead of packing it up for the season. The Dodgers were down 2-0 after the first inning, but that didn’t deter them, as they answered right back in the bottom of the second inning. AJ Pollock started the scoring in the bottom of the second inning with a solo home run. Chris Taylor, the star of the game, added a two-run home run, scoring Albert Pujols, giving the Dodgers a 3-2 lead after two innings.

The workhorse is taking the mound for game six in Atlanta, as Max Scherzer will make his fifth appearance of the postseason. In his previous four appearances, Scherzer has a 0-1 record with a 2.16 ERA over 16.2 innings pitched while striking out 23. In Scherzer’s one appearance against the Braves, on October 17, hit pitched 4.1 innings allowing two runs on four hits and striking out seven.

Sometimes Goodbye Is A Second Chance

The Atlanta Braves have played their final game in Dodger Stadium for the year, and Saturday’s game will be their second chance to move on to the World Series, for the first time since 1999. The Braves scored two runs in the top of the first inning when Freddie Freeman hit a two-run home run to deep center field, a no doubt about it shot, to give the Braves an early 2-0 lead. Unfortunately, after that, the Dodgers scored 11 unanswered runs, and the Braves offense could only muster three more hits the rest of the game.

The Braves 23-year-old right-hander, Ian Anderson will take the mound for the third time this season in an attempt to send the Dodgers home for the season. In his previous two appearances this postseason, Anderson has posted a 1-0 record with a 2.25 ERA over eight innings pitched while striking out eight. On October 17, Anderson pitched against the Dodgers. In that game, he only lasted three innings allowing two runs on two hits and struck out two.

The Atlanta Braves had their chance to send the Los Angeles Dodgers home for the season and to clinch a World Series berth. Instead, the Dodgers offense exploded for eleven runs and the momentum is completely in the Dodgers’ favor. Look for the defending champs to win game six and to force a game seven.