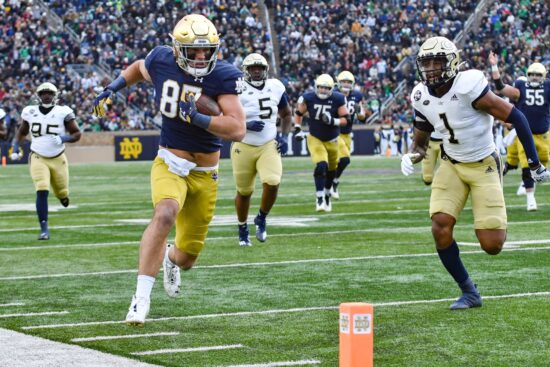 The Notre Dame Fighting Irish are coming off their biggest victory of the season, as they defeated Georgia Tech, 55-0. The Stanford Cardinals on the other hand lost by 30 last week, 41-11 to Cal. This is truly the tale of two different programs, so this should be an interesting matchup nonetheless.

The Notre Dame Fighting Irish have won their past six games, and their only loss this season has come against the now ranked number for Cincinnati Bearcats. The Fighting Irish, with no conference championship game, need to win big this week and hope for chaos after that.

The Notre Dame Fighting Irish offense is averaging 34.4 points per game on 407.3 total yards per game. Those 407.3 total yards break down to 256.5 passing yards and 150.7 rushing yards per game. The Fighting Irish are led by their senior quarterback, Jack Coan. Coan has completed 189 of 282 pass attempts for 2,296 yards while throwing eighteen touchdowns with just five interceptions. To complement the passing game, the Fighting Irish turn to their sophomore running back, Kyren Williams. Williams has rushed for 928 yards on 185 attempts while finding the endzone twelve times.

Can Stanford Turn Things Around

The Stanford Cardinals have been bad this season, to say the least. Nothing has gone the Cardinals’ way, but they look to win their final game of the season to give themselves something to build on.

The Stanford offense has been averaging 21 points per game on 309.6 total yards per game. Those 309.6 total yards break down to 219.1 passing yards and just 90.5 rushing yards per game. The Cardinals’ offense is led by their sophomore quarterback, Tanner McKee. McKee has completed 189 of 290 pass attempts for 2,155 yards while throwing fourteen touchdowns and seven interceptions. To complement the passing attack, the Cardinals turn to their junior running back Nathaniel Peat. Peat has rushed for just 401 yards and 76 attempts and has found the endzone three times.

The Notre Dame Fighting Irish have too much to play for while the Stanford Cardinals are just playing for something to build on for next season. Look for the Fighting Irish to dominate this matchup and wait to see what Championship week brings.