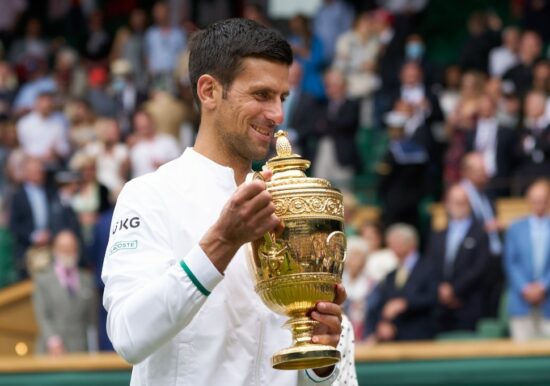 History is written today in London, at Wimbledon, where Novak Djokovic defeated Matteo Berrettini to clinch his 20th Grand Slam title and extend his chase for immortality. Novak started the contest a bit slowed, but after that went on to trash the Italian, who once again couldn’t keep the lead against the No.1 player in the world.

Djokovic was in a deficit against Berrettini in Paris but eventually ended on the winning side. It was the same this Sunday afternoon.

Despite having the support of the crowd, Berrettini was never in control and couldn’t find the rival’s weak spot. Novak drew the first blood, taking a 3-1 lead, but Berrettini responded in the toughest possible time for him, once Novak served for the set.

That boosted his morale, and we saw him beating Novak in the tiebreak and notching the opening sequence.

But afterward, Djokovic began playing his usual tennis, with an excellent return and versatile offensive weapons. Berrettini tried to hold on, but the Italian slowly started to lose his grip as time went by.

The fans were loudly supporting the new face in the Wimbledon finals, yet simply, he couldn’t do anything to threaten the Serb, who kept on pressuring and increasing the pace.

Entering History as the GOAT

Novak has 20 Grand Slam trophies, the same as Rafael Nadal and Roger Federer. The difference between these guys is the fact that the Serbian has enough power to win a few more and leave them behind. Roger is way past his peak, while Rafa only plays on clay, and even there, he isn’t as dominant as before.

After taking the opening two Slams of the 2021 season, Novak now has a chance to become the first player in the Open era after Rod Laver to claim all four majors in one calendar year. Furthermore, if he wins the Olympic gold medal, he could be the first male to win the Golden Slam.

Novak also became only the fourth player in the Open era with three consecutive Wimbledon titles, besides Federer, Sampras, and Bjorg.

We can say without any hesitation that the Joker is the best ever. He is the most versatile player, having at least two trophies at each Grand Slam and ATP Masters tournament, he has a positive record against his top two rivals, Nadal and Federer, and a chance to improve the numbers in the years to come.

Even though the media have their favorites, there is no way now to diminish his achievement because, following today’s win, Novak Djokovic is most definitely the GOAT.