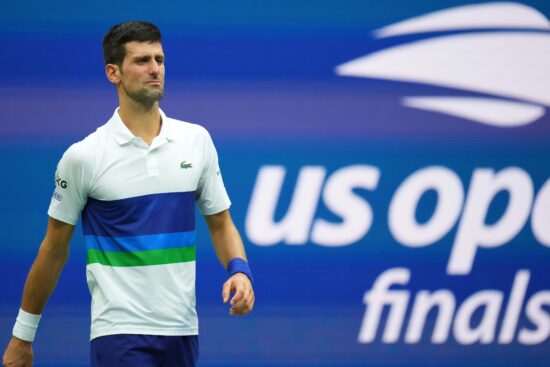 With the last Grand Slam of the year just around the corner, the tension in the tennis community is slowly starting to grow. Not only because we are about to see fantastic tennis, but also because we don’t know if we will see the best tennis player in the world at Flushing Meadows.

Novak Djokovic to Compete in the US Open?

In the last few days, we’ve seen and heard tons of news regarding Djokovic’s current situation.

Right now, unvaccinated persons can’t enter the United States. That is why Djokovic isn’t competing at the Western and Southern Open and previously couldn’t reach Montreal. If it stays like this, the 21-time Grand Slam champion won’t be in New York.

Not only that but the CDC (Centre for Disease Control and Prevention) recently relaxed some rules, but that still isn’t enough to permit Djokovic to play.

So far, Djokovic specifically stated that he wouldn’t take the vaccine and stands by his previous decision even if that costs him the title and the race for the most Grand Slam titles with Rafael Nadal.

No Support from Nadal

Many of Novak’s colleagues and famous public figures have raised their voices against the rules imposed by CDC. They hope to see their favorite in New York and are actively working on that. There is a petition for granting Djokovic permission to play, and it was sent to the highest governing bodies in the US, including President Joe Biden.

US Open 2022: Men’s US Open Vegas Odds, Prediction, How To Watch

What is noticeable though, is that there isn’t any support coming from Rafael Nadal, Djokovic’s biggest rival, and that is something that the media across the world detected. We’ve seen the Spaniard having some negative stance towards his rival in the case of his Australian Open scandal, and after that, the relationship between him and the Serb wasn’t as warm as before.

It seems that the stakes are too high now and that Nadal wants to have the most Grand Slam titles rather than to be collegial.

No matter what many believe, even if Djokovic plays, his chances of winning the title are pretty low. The fact that he missed the entire American tour will have a massive influence on his current condition and shape. While all the others played and prepared on similar surfaces like the one at Flushing, Djokovic was out of rhythm, practicing, but without a proper test.

Also, he wouldn’t have too much time upon his arrival to adapt to the circumstances in the USA, which is another factor that goes against him.

Djokovic is currently +180 to win the US Open, leading the way ahead of reigning champion Daniil Medvedev, who is currently priced at +190.