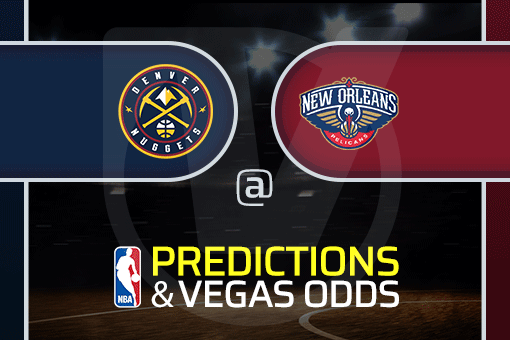 If you’re in search of the latest NBA betting odds and Nuggets vs Pelicans prediction, look no further because Vegas Odds has you covered.

Jose Alvarado broke out in the previous meeting between these two teams as he scored 38 points with eight three-pointers.

The Nuggets have won nine in a row before losing to the Thunder by two points on Sunday, If it weren’t for Shai Gilgeous-Alexander’s game-winner, Denver might have won their 10th straight game.

Nikola Jokic missed the Thunder game with a hamstring injury, and the Pelicans hope the MVP doesn’t play on Tuesday. In the lone meeting this year, Jokic scored 32 points with 16 rebounds and nine assists and gave the Pelicans headaches all game long.

The Pelicans have lost four in a row and have a 3-8 record in January. Zion Williamson hasn’t played since January 3 as he is out with a hamstring injury, although the three-week timeline is almost up for the big man.

Without Zion, it has been C.J. McCollum trying to lead the way, although he hasn’t shot too well lately, including 5-of-16 and then 6-of-21 in the past two games.

When the Pelicans topped the Nuggets earlier this year, it was the Jose Alvarado show, and they need him to find that spark to have a shot.

The Pelicans are facing the Nuggets at the wrong time. Zion Williamson isn’t ready to go yet, and the entire New Orleans team has been cold.

On top of that, Denver is coming off a tough loss to the Thunder and they are hoping Nikola Jokic is back in the lineup. Even if Jokic is out, the Nuggets have much more talent and barring another Jose Alvarado outburst, the Nuggets cruise to an easy victory.