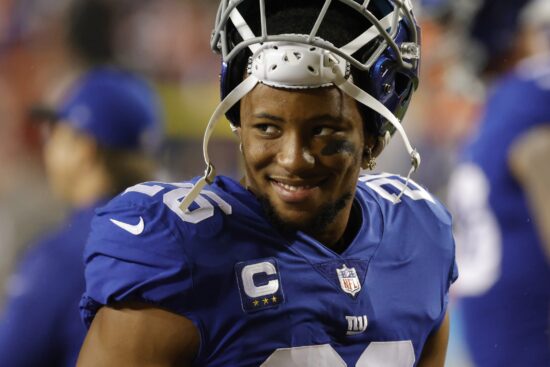 The Giants have at least three starters ruled out for tonight’s match against the Washington Football Team, plus Saquon Barkley, who is questionable.

Meanwhile, both the Raiders and the Cowboys have problems, as they suffered harsh blows this week.

Arguably the best player of the Giants, and their biggest star, running back Saquon Barkley, is listed as questionable for tonight. The reason for this is the fact that he played his first competitive match following Week 2 last season. Just to remind, the young player tore his ACL and had to miss the entire season.

Right now, the Giants are still not sure whether they should throw Barkley into the fire twice in five days. The Giants played their first match of the campaign at home vs. Denver Broncos, losing that contest 27-13.

Barkley’s contribution was miserable, carrying the football ten times for 26 yards, and the fans are still wondering whether he fully recovered from the injury. Obviously, the former No.2 pick at the 2018 NFL draft is way beneath his usual level, which might be one of the reasons why Giants’ staff isn’t willing to risk anything.

Apart from that, the team from the Big Apple will be without its starting tight end, Evan Engram, who injured his calf and is definitely ruled out. The same applies to left guard Shane Lemieux and OL Cam Brown.

The Giants come in as underdogs in this event, with the odds on their win set at +165. On the other side, the WFT stands at -160.

Las Vegas Raiders lost defensive tackle Gerald McCoy for the season. The 33-year-old picked up a knee injury on Monday night, against the Baltimore Ravens, in a match that his Raiders eventually won following overtime, 33-27.

McCoy also had a nasty injury in August 2020 that saw him missing the entire year. The six-time Pro Bowl and a four-time All-Pro hoped to revive his career with the Raiders, but unfortunately, he will have to battle this tough challenge.

The Raiders host the Pittsburgh Steelers this Sunday and are massive underdogs +245. Meanwhile, the Steelers are -205 to win.

This is bad news for the Cowboys, as Lawrence presented arguably their best defensive player. Against the Tampa Bay Buccaneers in Week 1, he had six tackles, two pressures, and a forced fumble.

On top of everything, the other defensive end, Randy Gregory, is not sure about the upcoming game on Sunday against the LA Chargers.

The Cowboys are playing at home, and this is a must-win contest for Mike McCarthy’s guys, who will find themselves in a nasty situation if they fail to win.