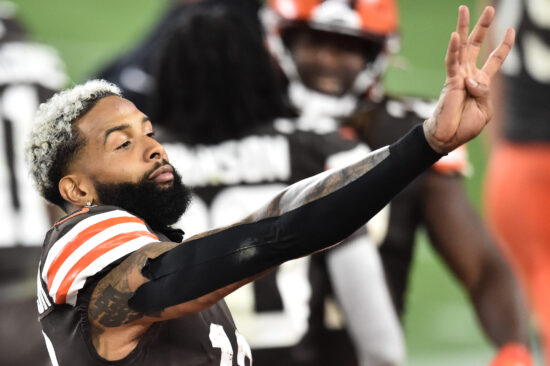 Football fans have decided – the best NFL moment on NBC in the past ten years is OBJ’s one-handed catch!

To celebrate the tenth consecutive year of being the #1 primetime show, Sunday Night Football organized a social media poll, appropriately named “A Decade of Sunday N#1GHTS”.

Sixteen moments were picked by the on-air team, who then let the fans cast their vote. Four moments entered the final, where the winner was crowned – Odell Beckham’s legendary catch.

November 23, 2014 is the day when Odell Beckham Jr. inscribed his name in NFL’s history. N.Y. Giants WR was on the receiving end of a 43-yard pass, which he caught with one hand while falling backwards!

Not only did he catch it, but he fell in the end zone doing it, scoring a touchdown for his team along the way. Unfortunately, it didn’t help the Giants much, as they ended up losing to the Dallas Cowboys.

In 2018, the Philadelphia Eagles won their first (and thus far, only) Super Bowl. They did it despite being bearing the label of a huge underdog. The main reason for that is their first-choice QB Carson Wentz got injured in Week 14.

Not many believed it would happen, but the backup quarterback turned out to be a true hero. Nick Foles was the man who cooked up a trick play that’s now known as the Philly Special.

Rather than throwing the ball, he was the one to catch it, scoring a touchdown along the way. Running back Corey Clement was who started the play, passing the ball to tight end Trey Burton, who then made the touchdown pass to his quarterback.

Eli Manning was the one who threw the 43-yarder that Odell Beckham caught with one hand in 2014. However, what happened two years earlier is what put Manning on this list.

It was 2012 and the New York Giants were playing against the New England Patriots in the Super Bowl XLVI. More than 166.8 million people tuned in to watch the game, thus breaking the record for the most-watched TV program in the history of the United States. As if they knew what was coming up!

What was coming is a spectacular over-the-shoulder pass by Eli Manning some four minutes before the end of the game, when his team was two points down. The pass marked the beginning of a 9-play drive that saw the ball being moved across 88 yards before passing the touchdown line.

Tom Brady won the MVP award at the Super Bowl XLIX, in which he led the Pats to a 28-24 victory against the Seahawks. He did throw four touchdown passes in the game, but the most memorable moment wasn’t created by Brady. Instead, it was cornerback Malcolm Butler who stole the show.

Twenty seconds before the end of the game, the Seahawks had a chance to turn the game in their favor. When everyone thought Russell Wilson was going to throw a Super Bowl-winning pass, Butler stepped it. Actually, he didn’t step in – he literally threw himself in the air to catch the ball!