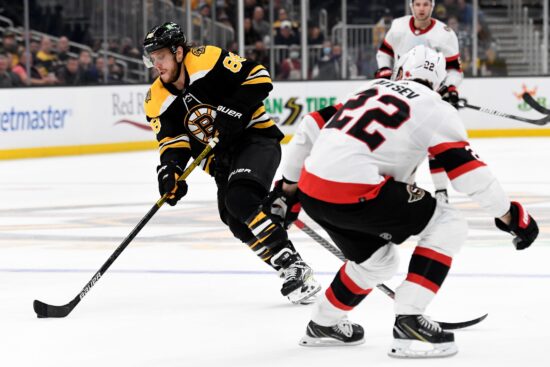 There should be a high-quality match-up in the NHL on Thursday evening, as two leading chances in the Eastern and Western Conferences square off at TD Garden in Boston. But, can the Boston Bruins make it two wins from two against the in-form Edmonton Oilers?

The Boston Bruins remain among the leading contenders in the Eastern Conference for Stanley Cup success in 2022. They are currently around a +1300 chance in the Stanley Cup betting for next year, and will be looking to improve their chances after a steady start to the season. Boston have won six from ten after ten games this term, and will be looking to build on the win that they achieved against the Ottawa Senators on Thursday evening.

The Bruins blew the Senators away in the second period of that game, as they scored three goals in a thrilling third. Ottawa had led 1-0 going into the start of the season, but the game was taken away from them by a dominant Bruins performance. Brad Marchand scored in the 3-2 success, while Patrice Bergeron and Derek Forbort also scored. It was a solid evening in net for Jeremy Swayman, as he saved 25 shots to average .926.

Oilers Hoping To Bounce back

It has been a steady start to the season for the Oilers too, as they are the current leaders in the Pacific Division after eleven rounds of games. They are slightly shorter in the Stanley Cup betting than the Bruins, as they are currently +1100. The Oilers have certainly shown their incredible offense already this term, as they are the highest scorers in the Western Conference with 47 goals. However, the 32 goals against may highlight that there is still room for improvement.

Edmonton lost for the second time in ten games in their last fixture, as they were beaten by the Detroit Red Wings. It was the second period once again that was crucial, as the Oilers had conceded three by the time that the third period got underway. They eventually went down to a 4-2 defeat, with Connor McDavid and Jesse Puljujarvi scoring the goals in the defeat for the Oilers.

Neither side has been able to dominate this fixture in recent years. Both the Oilers and Bruins have won two games apiece in the previous four. However, both of the last two games have been won by the team playing away from home.

Both the Bruins and Oilers have strong claims to win this game, and it should be a close match-up. Overtime may be needed to separate the sides, but we have landed on the pick for the Bruins with home advantage.