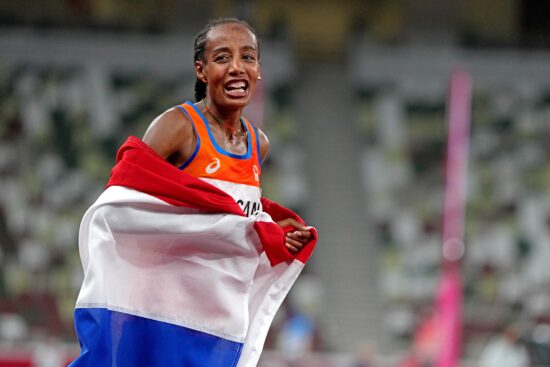 We could be about to see something very special indeed in the Tokyo Olympic Games this summer, as Sifan Hassan looks to achieve a feat that has never been done before. The Dutch superstar is looking for an unprecedented treble of golds in 5,000m, 10,000m and 1,500m.

Hassan faced few issues as she won the first of her gold medals in Monday’s 5,000m, as she sat back and waited for her opportunity to pounce. The Dutch star sat just behind the leaders going into the final lap, before producing one of the all-time performances on the final circuit. Hassan smashed the record for quickest final lap in the event, as she showed off her prowess in the final straight.

Hellen Obiri looked to be the woman to step up to the challenge laid down by Hassan, but she had no answer for the final sprint and quickly surrendered her challenge and accepted silver. Gudaf Tsegay was the bronze medal winner. Hassan’s victory came just hours after a scare in the 1,500m heat, as she was tripped during the race. However, she recovered well to win the race comfortably.

Hassan In Semi-Final Action On Wednesday

There will be a welcome break for Hassan on Tuesday, as she will get a rare day off from competition. She will be back on the track for her semi-final of the 1,500m tomorrow, as she looks to confirm her place in the final of the event. Her dream of the remarkable treble was almost ended in Monday’s heat, but she was able to overcome the fall to take first place. She is already the clear favorite in the BetOnline.ag market to win the final of the event, which will take place on Friday.

All being well, Hassan will come through that final with another gold, and all the attention will then switch to Saturday’s 10,000m final. It is hard to put into words how great of an achievement it would be if she is able to achieve the feat. Few stars would even dare of tackling all three events, never mind actually winning gold in all of them.

The recovery time will be integral to her chances of success, but BetOnline.ag already sees her as the narrow favorite to win the final of her three events. Hassan did hold the world record time over the distance for a period in June, as she finished a 10,000m race in 29:06.82, which is also a European Record. Hassan won gold in the event at the World Championships two years ago, and her main rival in the Olympic final could be a familiar foe.

Letesenbet Gidey finished with a silver medal two years ago, as she clocked a personal best time of 30:21.23. The Ethiopian athlete will need to improve on that form again in Tokyo, but her world record-smashing time of 29:01.03 set earlier in the year does highlight that she is more than capable of laying down a serious challenge in the final on Saturday.