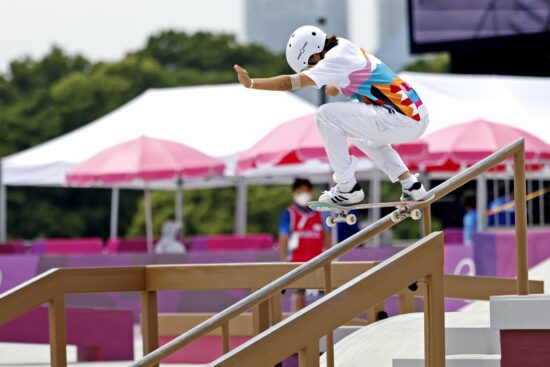 The Olympic Games is all about finding new and interesting sports to become immersed in. Following the excitement of the BMX last week, the attention will turn to skateboarding, which will be staged in the Tokyo Games for the very first time.

The Skateboarding Park will kick off on Wednesday, with the heats and final both taking place on the same day at the Ariake Urban Sports Park. Japan have dominated the skateboarding events to this point, as they won golds in both the men’s and women’s street events, as Yuto Horigome and Momiji Nishiya won the top prize.

Misugu Okamoto is the clear favorite in the betting with BetOnline.ag to win the event this week, as she is currently the top-ranked star in the world. When qualifying for the Games, she won three qualification events, and also made history in the same calendar year in 2019 by becoming the first female to produce a kickflip Indy. She comes into the Olympics as the reigning world champion, having won gold in Sao Paulo.

Sakura Yosozumi is another Japanese contender, as the 19-year-old looks to add Olympic gold to the Asian Games gold that she won back in 2018. She also won bronze at both the X Games and Nitro World Games in the same year. History will also be made in the park event, as Sky Brown becomes the youngest Team GB athlete in the history of the Games. The 13-year-old won gold in the X Games earlier this year, and was a bronze medallist two years ago in the World Championships. On current form, she could be the best value selection.

The men’s skateboarding park event looks to be a much more open contest, with a number of stars having leading chances. Any of the top five stars in the betting could have a chance of claiming gold.

Heimana Reynolds for Team USA could be the leading contender after winning gold at the World Skate Championships two years ago. Brazilian contender Luiz Francisco finished in silver on that occasion. His compatriot, Pedro Barros won the gold in 2018, and also won silver in the 2016 and 2017 events.

Zion Wright also can’t be ruled out after winning the Vans Park Series Pro Tour event in 2018, and was second in the Simple Session in the same year. However, his American teammate looks set to continue his meteoric rise to the top of the skateboarding sport with a gold medal win in Tokyo on Thursday.