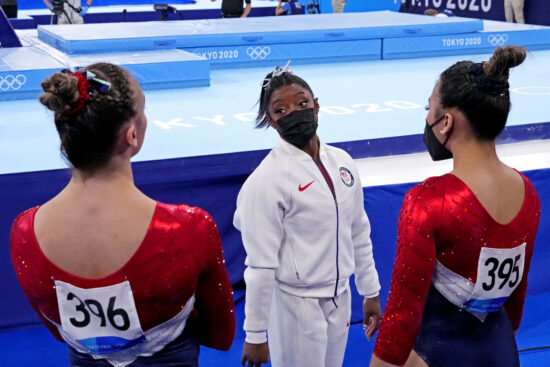 It has been an eventful week for the American team. In an action-packed team final on Tuesday afternoon, Team US lost its star woman, as Simeone Biles pulled out after competing on just one piece of apparatus. She has now revealed that she will not be defending her Olympic crown in the All-Around event on Thursday.

Simone Biles Pulls Out Of Event

The announcement was made on Wednesday morning, as USA Gymnastics revealed that they supported Biles’ decision not to compete, and ‘applauded’ her bravery for opting to focus on her well-being rather than the gold medal. The American posted on social media before the start of the Olympics and spoke at length about the pressure that she deals with over the course of the Olympic Games.

It would come as a hammer blow for the USA team, as Biles’ withdrawal means that they could lose out on important medals in the all-around event. However, without a doubt, the most important thing is the well-being of the four-time champion. Her decision should be applauded, as it once again demonstrates that a positive mental health is more important than anything else, even a gold medal at the Olympic Games.

Biles has been a positive role model throughout her career, but her decision to prioritize mental health is one of the bravest decisions that has been made by an athlete at the Olympic Games. It was a move that has been praised by many athletes and celebrities.

There has been no word yet whether she will compete in the uneven bars, floor, and beam events that are due to take place over the next seven days. However, should the American not take part, the BetOnline.ag betting markets could be ultra-competitive for the events.

Due to the ongoing Biles story in the Team Final, there were a higher number of media representatives at the venue. However, it was to be the Russian Olympic Committee that would hold their nerve, as they ended the dominance that the American team had achieved in the event since 2008.

The Russians were superb throughout the event, with Viktoriia Listunova, Vladislava Urazova, and Angelina Melnikova all playing their part. They went ahead on the third rotation and claimed the win after impressive displays on the floor.

Team USA and the remaining stars competing (Jordan Chiles, Suni Lee, and Grace McCallum) looked in danger of missing out on a medal altogether at points. However, their togetherness played a crucial role as they claimed silver. Meanwhile, there was also a historic bronze for the young Team GB team, as they claimed a medal in the team event for the first time in 93 years. Alice Kinsella, Amelie Morgan, and twin sister Jessica, and Jennifer Gadirova were excellent throughout the event and were able to pounce into third on the final rotation.

Meanwhile, all attention will be back on the Ariake Gymnastics Centre on Thursday as the all-around final takes place.