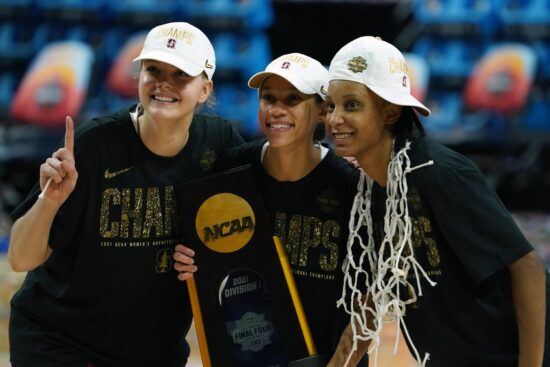 We’re coming off of one of the most exciting tournaments in NCAA history! Bars downtown flooded with fans despite a pandemic glued to the numerous flat screens which displayed different tournament games. For the first time in years, you had no idea who would win the National Championship.

As I attempted to make my way to the bathroom, I stopped and noticed a little girl with a South Carolina Gamecocks jersey. She donned a black basketball jersey with a white long sleeve shirt underneath that was mostly covered by her long blue braids. I already knew the answer, but I bent down and asked her who her favorite player was on the team. She loudly shouted, Aliyah Boston!

You would think it was the men’s tournament packing the bar, but it was the opposite! This year was the first time the women’s basketball tournament was nationally televised, and doing so allowed more viewers to witness how incredible the women’s game is becoming.

I believe that the general public has lacked interest in the women’s game because these women are not receiving the same level of marketing as the men’s game.

How will you know how skilled these players are if you have never seen them play?

How would you know who the league’s stars are if no Nike commercials showcasing the WNBA superstars like they do the NBA superstars? You hear people say that the NBA is more marketable than the NFL because the players wear helmets, so the general public doesn’t know the average NFL player.

It’s almost like the more prominent brands have an invisible helmet over the entire WNBA, but I believe the chin straps were loosened, and the helmet was removed last summer. The Bubble, aka ” Wubble,” changed a lot of minds for first-time viewers.

During the pandemic, sports completely stopped and made the average fan crave for any live-action to return to their living room. When the WNBA returned, they collected more attention from people looking for something to entertain them.

As harsh as that sounds, that was the reality for many who never watched a WNBA game before and cannot name a single player in the league. They noticed what I and many others who cover the game have seen for the last twenty-five years! These ladies can hoop!

Not only are they athletes, but they’re intelligent, courageous, activist, and wearing all those hats while still being a mother! The new viewers now saw how relatable these women are. People attach themselves to what they can relate to.

Tyler Butler Greenville South Carolina native Tyler Butler is currently a proud member of the NABJ, and owner of Sports and Culture Sports Media LLC. He’s a husband and father of two daughters. Tyler has a passion for covering all sports and helping to provide the small schools an opportunity to gain exposure. His company is based out of the Greenville area but has recently expanded to Arkansas after covering the Arkansas Women’s Basketball Team. Tyler’s main goal is to help the younger generation understand the importance of journalism and shining a brighter light on women's sports of all ages.