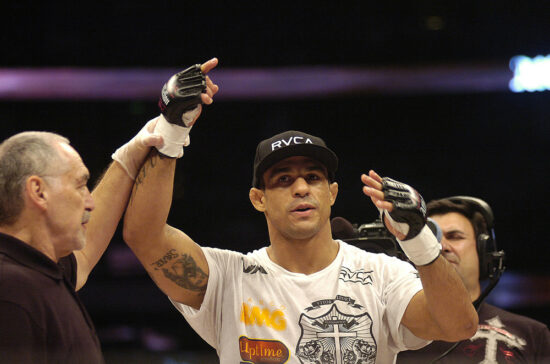 What We Know so Far:

Soon after the fight was announced, it did not take long for online sportsbook BetOnline.ag to post Belfort vs. De la Hoya betting odds.

Even though Belfort will be crossing over from MMA to boxing, the former UFC lightweight and heavyweight champ opened a small -140 favorite. De la Hoya getting his hand raised for the first time since May of 2008 (Steve Forbes) pays +100.

How can one of the best boxers of all time open an underdog versus a retired MMA fighter? Dave Mason from BetOnline explained:

“The last time we saw 48-year old Oscar compete was way back in 2008 when he lost to Manny Pacquiao. Sure Vitor is old and retired as well, but he has stayed active up until 2018. Additionally, since this won’t be under the UFC umbrella and USADA testing will be non-existent, my guess is TRT Vitor will show up; he will be much bigger and stronger. Lastly, this isn’t like Ben Askren getting in the ring – Vitor has some of the fastest and most powerful hands in the history of mixed martial arts.”

Mason concluded how he is looking forward to this bout of legends:

“From a business point-of-view, we here at BetOnline love these exhibition boxing matches. Askren versus Jake Paul and Mayweather versus Logan Paul both saw an insane amount of action. We are very much looking forward to seeing how much action Belfort and De la Hoya brings in. There will be hype. People will be watching. We will have the most betting odds and people will be betting – A LOT.”