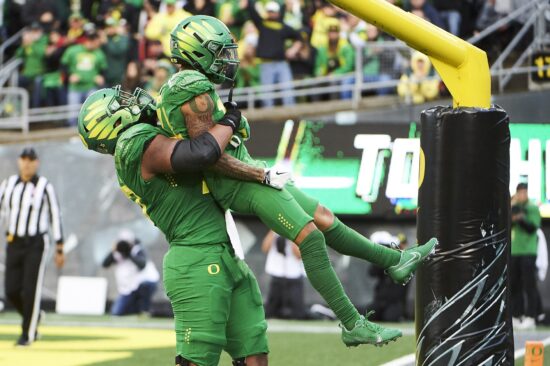 As mentioned, one of the two losses the Ducks suffered this season came at the hands of the Utes, just two weeks ago, These teams are no strangers to each other, this is the second time that these two teams have met for the PAC-12 Championship, with Oregon defeating the Utes by a score of 37-15 in 2019.

This season, however, the Oregon Ducks are averaging 32.7 points per game on 427.9 total yards per game. Those 427.9 total yards break down to a well-balanced 215.5 passing yards and 212.4 rushing yards per game. The Ducks’ offense is led by their senior quarterback, Anthony Brown. Brown has completed 187 of 298 pass attempts for 2,261 yards while throwing thirteen touchdown passes and just four interceptions. Brown has also been great on the ground, rushing for 559 yards on 118 attempts while scoring eight touchdowns. To complement the passing attack, the Ducks took to their junior running back, Travis Dye. Dye has rushed for 937 yards on 158 attempts and has found the endzone twelve times.

Can Utah Win Two in a Row

Not only are the Utah Utes looking to win their first Pac-12 Championship, but they are also looking to defend Oregon from winning their third straight. The Utes played the Ducks hard in their matchup this season, defeating the Ducks 38-7 just two weeks ago.

The season the Utah Utes are averaging 35.3 points per game on 434.3 total yards of offense per game. Those 434.3 total yards break down to 216.1 passing yards and 218.2 rushing yards per game. The Utes offense is led by their sophomore quarterback, Cameron Rising. Rising has completed 172 of 274 pass attempts for 2,109 yards while throwing seventeen touchdowns and just three interceptions. To complement Rising and the passing attack, the Utes look to their sophomore running back, Tavion Thomas. Thomas has rushed for 978 yards on 168 attempts while finding the endzone eighteen times this season.

Who Will Win the Pac-12 Championship?

A rematch of a game played on November 20th should be another great game. These two teams not only know each other well, but their offenses put up very similar numbers. I’m looking for the Ducks to avenge their loss early in the season and win their third consecutive PAC-12 Championship.