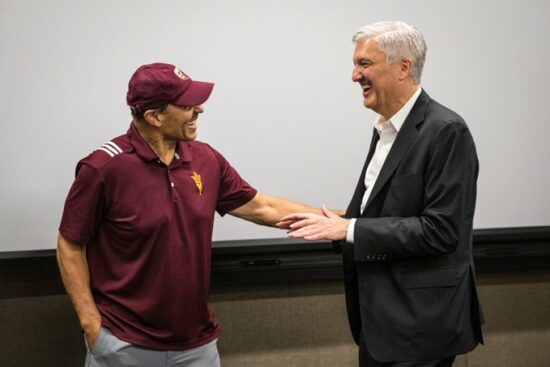 The Pac-12 Conference officially announced the hiring of a new commissioner on Thursday, and they went outside of the sports world to find the right man for the job. George Kliavkoff has been chosen by the league, and he will begin his duties on July 1.

Kliavkoff is currently the president of entertainment and sports for MGM Resorts International, but he received unanimous support to lead one of the most powerful conferences in intercollegiate athletics. This is a five-year contract that was signed, and the financial details were not disclosed in the announcement.

The Pac-12 Conference has been searching for a new commissioner since January when it was announced that Larry Scott would be stepping down at the end of June. Scott has guided the conference since 2009, and he will help train and transition Kliavkoff into this new role.

Search firm TurnkeyZRG aided in the hiring process of Kliavkoff, but the Conference has representation as well. The presidents from Oregon, Washington, and Washington State were all a part of the search committee.

Kliavkoff gave an introductory press conference on Thursday and was asked about a number of issues facing the Pac-12 and college sports in general. One of the big challenges he faces is helping to get the conference back into the College Football Playoffs.

Another major crisis facing college sports at this time is the “Name and Likeness” debate that has taken stage. Pac-12 schools have pushed for a change to the current laws, and legislation in California has aided in that.

There is talk of expanding the College Football Playoff, and Kliavkoff gave his support to that movement in the press conference. Despite not having an extensive background in college sports, Kliavkoff has dealt with some current issues in his role at MGM International.

Despite failing to win any men’s basketball or football championships during his tenure, Scott helped to turn the Pac-12 into a powerhouse in many other sports. Kliavkoff will be tasked with continuing to produce championships in other sports while trying to solve the basketball and football issue.

One of the toughest decisions Scott was forced to make during his tenure was postponing the 2020 college football season due to the pandemic. This decision brought about plenty of debate, especially after other Power 5 Conferences were still in action.

Still, the tenure for Scott was mostly positive and will be a tough act to follow for Kliavkoff. Scott and his group have things in place for continued success, especially when it comes to potential revenue.

Scott added Utah and Colorado to the conference in 2011 and was also able to secure a TV deal worth $3 billion for the Pac-12 Championship football game.

The creation of the Pac-12 Network in 2012 was also a huge step in the right direction for the league, but the network could use some work. Other Power 5 Conferences are earning much more revenue from their programs, and Kliavkoff will have to find a way to bridge the gap.