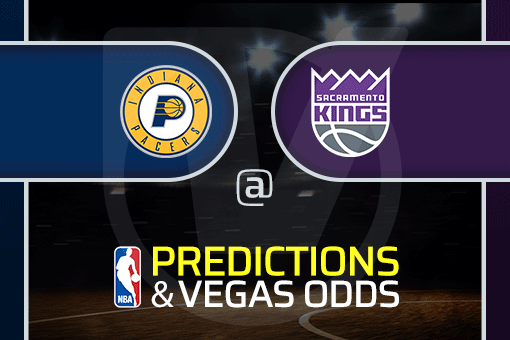 Looking for the latest Pacers vs Kings prediction? Look no further, because Vegas Odds has you covered.

Watch the Pacers and Kings battle it out as these two young teams match up for the first time since their trade in the off-season.

The Pacers are a surprising 12-8 this season coming into Wednesday night’s matchup with the Kings.

Currently sitting fourth in the eastern conference the Pacers are averaging 115 points per contest good for 7th in the NBA.

The Kings on the other hand are 10-9 this season scoring a league-leading 119 ppg making them the highest-scoring team in the association.

These are two of the most surprising teams in the league this season. Indiana was pegged as a team looking to tank this season.

The Kings were pegged as a team who would be outside looking in when it came to the playoffs.

As it stands right now both of these teams would be firmly in the playoffs.

Tyrese Haliburton and Bennedict Mathurin have been electric this season for Indiana.

This young backcourt is looking like the future of the league. Haliburton is currently leading the league in assists at age 22, while Mathurin is averaging 19 ppg and shooting over 40% from three as a rookie.

Sacramento hedged its bets when it traded for Domantas Sabonis in the off-season and it has paid off. Sabonis is averaging 16 points and 11 rebounds this season and is the playmaking big Sacramento has been looking for.

The Sabonis addition has unleashed point guard De’Aaron Fox who is currently having his best season to date. Fox is averaging 25 points and 6 assists a game this season.

The Kings are 6-3 at home this season while the Pacers are 4-4 on the road.

The Pacers are 20th in the league in opponents’ ppg giving up just 114 ppg.

The Kings on the other hand give up 117 ppg to opponents on the season, good for 27th in the association.

These two teams play well on the offensive side of the ball, are poor defensively, and play at a high pace. Expect this to be a higher-scoring game.

Expect this matchup to go off script these teams playing at a high pace and scores should climb if either team gets hot from three.

The betting line is sitting at 232-235 for total points in this contest. The average total points between the two teams show that it should be in the range of 234 total points. I would be inclined to take the over.

If picking a winner; the Kings are the favorite.