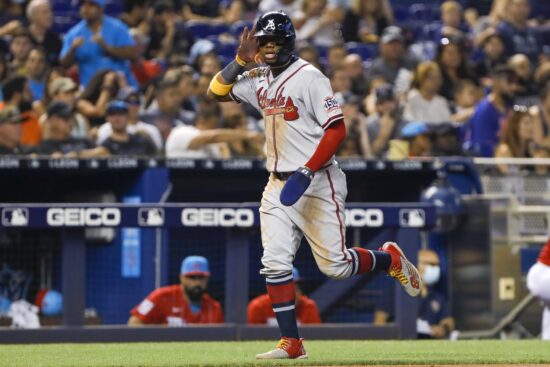 The San Diego Padres will try to put a disappointing series loss to the Cubs behind them when they start a three-game series against the Atlanta Braves on Friday night. The Padres are still in a good spot just a game back from the Dodgers in the NL West, but they also have a tough road trip upcoming also heading to Philadelphia and San Francisco.

The Braves have a little momentum with wins in three of their last four as they try to get back in the NL East race, currently 6.5 GB from the Mets. The Vegas odds have Atlanta a pretty significant -154 favorite for Friday night’s tilt (SD +135). This Padres vs Braves matchup is also expected to be a pitcher’s duel with a run total of just 7.

San Diego just lost 2 of 3 to the struggling Cubs but the Padres still have some value even as road underdogs on Friday night. That’s because San Diego is a solid 10-5 in road games so far on this young season and also due to Manny Machado having the type of season the Padres expected when they signed him to a 10-year, $300 million contract in 2019.

Machado leads the majors in batting average (.383), total bases (75), hits (46), and runs (27). His strong play has helped the Padres stay afloat in the NL West until hopefully Fernando Tatis, Jr. can return sometime later this Summer. Machado has had some help too, namely Eric Hosmer who was 3-5 with a HR on Wednesday vs. Chicago and is hitting .367 on the season.

Bob Melvin is hoping he doesn’t need a ton out of Machado and the rest of his offense on Friday night with Yu Darvish (3-1, 4.05 ERA) on the bump. The right-hander gave up 9 ER in just 1.2 IP in his second start of the season which has really inflated his ERA, but he’s buckled down to allow 6 total runs in 4 starts since then. Darvish has a 1.71 ERA in his six other starts this year.

Atlanta hopes to hold up their end of the bargain in this expected pitcher’s duel with Max Fried (4-2, 2.68 ERA) up in the rotation. Fried has picked up the win in four straight starts, allowing a total of 4 ER over 26 IP for a 1.38 ERA.

Fried has had some success against Machado in his career, holding him to 1-7 batting (.143) although that one hit was a HR. In total the current Padres lineup is just 5-38 (.071) in their combined careers vs. the Braves starter.

While San Diego batters have their work cut out for them on Friday night, it’s no picnic facing Darvish for the Atlanta offense. Ronald Acuna, Jr. has a 7-game hit streak but he’s questionable with a groin injury that forced him to miss Wednesday’s win over Boston. Acuna, Jr. is 0-5 in his career vs. Darvish, but Marcell Ozuna (5-16) and Matt Olson (2-3) have had some success against the right-hander. Dansby Swanson (1-11, 4 K’s) has not.

The only way to look at this one is that runs are going to be at a premium at least for the first 5-6 innings the way both of these starters have thrown over the past month. Things could go either way in the last few innings so in that case the value is on the Padres as the underdog. This contest should also be a low scoring affair as expected.