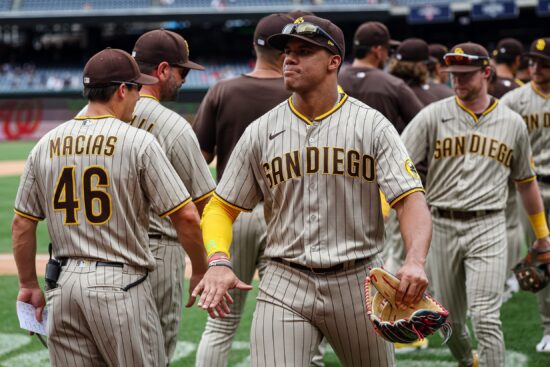 The San Diego Padres wrap up their East coast swing with three games at the Miami Marlins. The Padres were only able to take two out of three from the last place Nationals over the weekend, but they have four wins in their last five games and maintain a hold on the second wild card spot in the N.L.

The series opener should be a pitcher’s duel as San Diego sends Joe Musgrove (8-5, 2.91 ERA) against Sandy Alcantara (10-5, 2.01 ERA). The Vegas odds reflect a low scoring game with a run total of just 6.5 while San Diego is a -132 favorite in this Padres vs Marlins matchup.

San Diego’s Musgrove hasn’t been as dominant as he was to start the season when he was 5-0 with a sub 2.00 ERA in April and May. Musgrove signed a 5-year, $100 million contract extension on August 1st even after going 0-2 with a 4.24 ERA in July. He’s 0-1 with a 5.40 ERA in two August starts, but looked good last time out completing 7.0 IP and allowing just 1 ER in a win over the Giants.

Manny Machado and Nick Martinez are Miami natives that return home for this three game set. Machado comes in hot too after hitting .429 over the past week and he has multiple hits (with 2 HR) in five straight games. Juan Soto is also heating up for the Padres, with a .375 average in his last six games while hitting his first home run with the club last Tuesday.

San Diego has scored double digit runs in two of their last four games and have plated at least 6+ runs in four of their last five. That gives Alcantara a challenge in this Padres vs Marlins matchup especially as he’s dealing with some things right now, allowing 4ER in two of his last three starts.

Of course the thing about Alcantara is that in between those 4ER outings he had a complete game shutout against the Reds. Even with 4ER outings in both months, Alcantara’s ERA was 2.12 in July and is 2.16 in August. This game is the May 6th rematch between Alcantara and Musgrove in which the Marlins pitcher gave up 2 ER over 4.2 IP and took the loss as Miami fell 3-2.

Hitters are going to be up against it on Monday night. Machado has gone 3-5 in his career against Alcantara while Soto is 9-31 with 2 HRs. Nelson Cruz has had some success against Musgrove going 5-12.

San Diego doesn’t have to travel from the West Coast for this series since they already spent the weekend in Washington. That has to give the Padres somewhat of an advantage in the opener but the best way to play this is on the total. Both pitchers have their All-Star aces on the mound, but each has shown signs of wearing down lately towards the end of a long season with a heavy workload. It won’t take much to push this ‘over’ with a total of just 6.5.