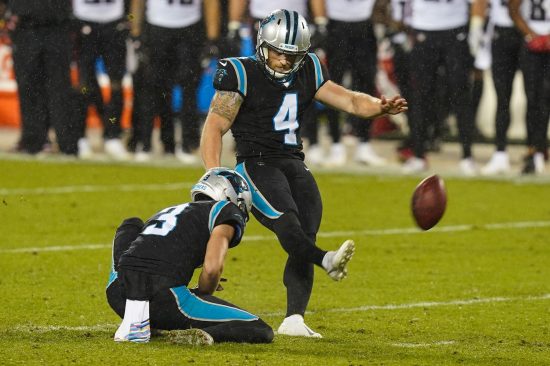 The Panthers quarterback Teddy Bridgewater had a bad game on Sunday, the result of which was that his team lost to the Bears, thus ending the 3-game win series. The 27-year-old has a chance to bounce back against the Saints, who haven’t been too great in defense this season. The New Orleans team, however, has been fantastic in the offense, which is no surprise knowing that Drew Brees is their QB. A lot of points scored on both ends is what everyone’s expecting to see in the Panthers at Saints game, but which team is going to win?

From -17 to Victory Against Chargers

The previous game the Saints played was on Monday, October 12, against the Los Angeles Chargers. In what was one of the most exciting NFL games this season, we saw the Saints coming back from a 17-point deficit to win in the overtime. The man who made the comeback possible? Drew Brees!

The 41-year-old passed for 325 yards, while also making one touchdown pass and one touchdown run. This was only his second game in the career to see his team overcoming a deficit of 17 points. The previous time it happened was in 2009 during the Saints Super Bowl season.

Their Super Bowl dreams are now rekindled, although the Saints are still far from being thought of as one of the favorites. The thing is that despite being superb in the offense, their defense has been pretty poor. This team has played five games so far this season, but have conceded a total of 150 points, which puts them near the bottom of the table when defense is concerned.

Panthers Hoping to Bounce Back After the Bears Defeat

On Sunday afternoon, the Panthers winning run came to an end, when they got defeated by the Chicago Bears. The score in that game was 23-16 in favor of the visiting team. The main takeaway of that game is that the Panthers quarterback Teddy Bridgewater was not playing the way he got everyone used to.

We saw him passing for his season-low 216 yards, completing only 55% of his passes. He also had one interception in that game. However, before that game, Bridgewater was the leader for the highest completion percentage (73.5%).

Over in Carolina, everyone’s hoping that he can bounce back. Knowing that the Saints haven’t been great in defense, the Panthers at Saints game on Sunday seems like an ideal opportunity for the quarterback to get back on the right track. The big question is can he do better than his rival on the opposite side, Drew Brees?

Panthers at Saints is going to be a clash between two fantastic quarterbacks, playing for teams that aren’t too great in the defending department. That said, it would be a major surprise if we didn’t see more than 52 points in the game.

When it comes to the match-winner, the Saints look like the better team. Still, they probably aren’t going to be able to cover the -7.5-point spread, as it’s very likely this is going to be a close game.

Our Panthers at Saints Picks: