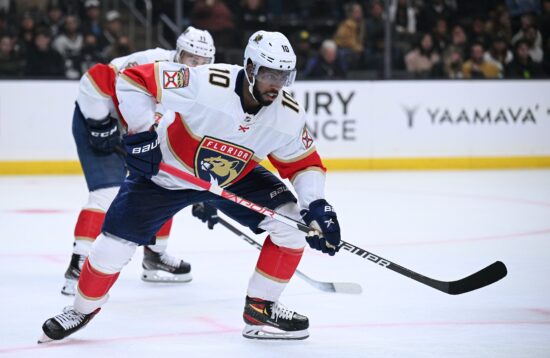 The Florida Panthers travel to Nevada this Thursday to take on the struggling Vegas Golden Knights. Florida is 6-1-0 in March, while Vegas is on a five-game losing streak. Knowing this, one would assume that the Panthers are huge favorites. However, Vegas odds for this game suggest that we might see a real battle on the ice.

Florida Panthers to Continue Their Surge?

The Florida Panthers are among the main betting favorites for the 2022 Stanley Cup at +525. It’s no surprise, knowing that their current record is 41-6-13 (88 points), which puts them at the top of the Atlantic Division.

They are without a loss in regulation in seven previous games, but NHL bookmakers seem to think their superb run might come to an end.  The reason for this might be that in their previous two games, the Panthers played a tie in the regulation.

First, they played 2-2 with the Los Angeles Kings, who then beat them by penalties. It happened on Sunday evening. Two days later, the Panthers grabbed a 3-2 overtime win over San Jose Sharks thanks to Frank Vatrano’s goal – his second of the game.

However, before those two games, the Panthers were nothing short of sensational, winning five straight games.

Ahead of Thursday’s clash with Florida, Vegas is occupying the #4 position in the Pacific Division. The trouble is that if the Golden Knights lose again, they could drop drown one spot. With a 32-4-26 record, they got 68 points, which is just one more than the Vancouver Canucks.

Further, the Anaheim Ducks have three points fewer than them, meaning that this team too can get in the playoff race. Even the San Jose Sharks still have a chance to fight for the postseason. They got 60 points in total, but also three games fewer than the Golden Knights.

What all this means is that Vegas needs to start winning again. Unfortunately for these guys, they don’t know of a victory in their previous five games. During the losing streak, the Golden Knights conceded 23 goals while scoring only 11.

The explanation behind their poor run is that Vegas has a number of players who are sidelined. In fact, at least eight of them could miss Thursday’s game.

The Golden Knights are going to give their utmost on Thursday but will that be enough to beat the Florida Panthers. Probably not, as the Atlantic Division leaders are playing superb hockey. Still, we could see Vegas grab one point by taking the game to overtime.