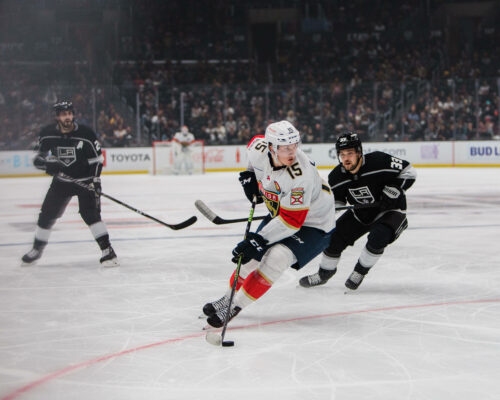 If you’re looking for the latest Panthers vs Oilers predictions and odds, then look no further than Vegas Odds.

Two sides that have been struggling for consistency in the NHL this season will clash on Monday evening. The Edmonton Oilers will have home advantage as they look for a second win, while the Florida Panthers will be looking to bounce back from a recent defeat.

It has been a decent enough start to the season for the Edmonton Oilers, as they sit seventh in the Western Conference standings. To this point, they have gone 11-10-0 in the NHL, which means they are still searching for the consistency they require to finish in a playoff position. They have won four of their previous ten games, but they have also lost six times in regulation during that period.

The Oilers have a poor home record this term, having gone 5-6-0. Further evidence of their prowess on the road was evident in their previous fixture, as they recorded a 4-3 win at Madison Square Garden against the New York Rangers. All four of the Oilers goals in that win were scored in the final period, with Evan Bouchard scoring twice.

Meanwhile, the Florida Panthers sit outside the playoff spots in the Eastern Conference, as they are currently located in tenth. Their overall record this term reads 10-8-3, while they have excelled on the road. Away from home, the Panthers have a very impressive record of 6-2-3, meaning that they have lost just twice in regulation time away from Florida this term.

However, their big problems have come at home. There was further evidence of that in their previous fixture. On that occasion, they fell to a 5-4 defeat against the St. Louis Blues after overtime. The Panthers started that game very well, but they faded in the final period.

It looks hard to avoid the fine away record boasted by the Panthers this season coming into this fixture, and that could be the key form line to follow. Therefore, we could see the Panthers bouncing back from their recent defeat with a victory in Edmonton.