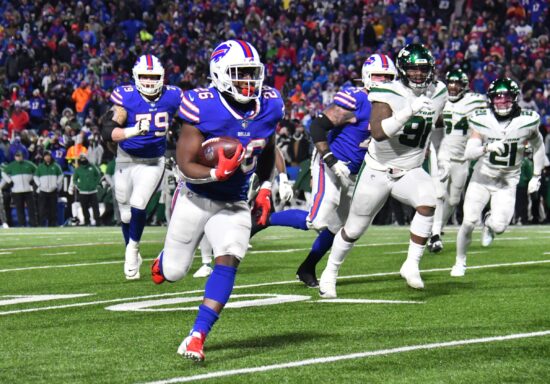 It’s time for the New England Patriots vs Buffalo Bills Pt. 3. The previous two duels between these AFC East foes were played in the regular season. Their third clash of the 2021-22 campaign will be played in the Wild Card playoffs.

The game is to take place on Buffalo’s turf, Highmark Stadium in Orchard Park. The reason why the Bills got the home-field advantage is that they finished higher in the AFC Rankings than the Pats, winning the division along the way. Still, that hasn’t satisfied their appetites.

Instead, their ambitions go beyond that, but so do the ambitions of the Foxborough franchise. Both teams are hungry for success, which is why fun is guaranteed for Saturday evening.

The Bills finished as the #3 seed in the AFC with an 11-6 record and a points differential of 483-298. Their offensive team scored the most points in the conference (28.4 PPG), while their defensive team conceded the least number of points of all the teams in the NFL (17.0 PPG).

For all these reasons, it’s not surprising that online NFL sportsbooks see the Bills as one of the contenders for the Lombardi trophy. At the moment of writing, the Vegas odds on Buffalo winning the Super Bowl LVI are +700, making the Bills Mafia the third favorite.

Getting to the Championship game isn’t going to be easy. In fact, advancing to the Divisional playoffs could prove to be a challenge for the Bills. It’s because they’re locking horns with a team that’s already beaten them at Orchard Park.

It happened on December 6, when the Patriots won 14-10 after managing to keep the Bills quarterback Josh Allen to just 145 passing yards – his second-worst yardage of the season.

Allen did get his revenge 20 days later when he led his team to a win at Gillette Stadium. The score was 33-21 for the Bills, with Allen throwing for 314 yards and two touchdowns.

Coach Belichick criticized his team after the disappointing loss to the Miami Dolphins in the final week of the regular season. One of the top candidates for the Coach of the Year award said his boys made “too many mistakes” in that game. Unfortunately for him, it wasn’t a one-off situation. The thing is that the Pats finished the season with a 1-3 record.

They did blow-out the Jacksonville Jaguars on the second day of Christmas but we saw them struggling each time they played against teams that are strong in the defense. In fact, each of those three losses happened against a top 10 defense – Indianapolis Colts, Buffalo Bills, and Miami Dolphins.

The reason behind all this might lie in the fact that their offense doesn’t have too much experience. After all, their signal-caller is a rookie. The man in question is Mac Jones, a wunderkind who’s already broken some franchise records.

Still, he hasn’t been playing great over the last couple of weeks. In fact, in four of his previous five games, Jones’ passer rating was below 100. In one of those five games, we saw him recording his worst passer rating of the season. It happened in Week 16 when he got to just 31.4. The worst thing is that New England’s opponent in that game was Buffalo.

The Pats did have several shiny moments this season but it seems their journey will end in Orchard Park. Not only do the Bills look stronger than them, but they’ve also been in much better shape over the last couple of weeks.