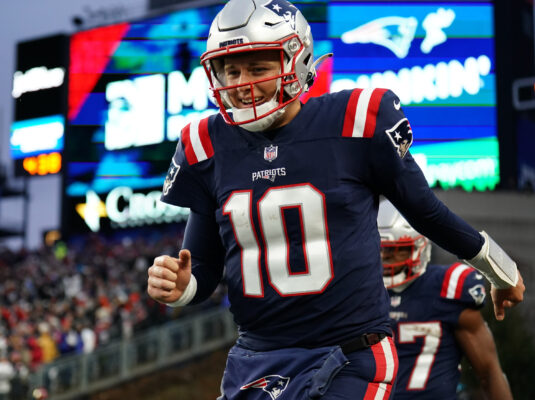 The AFC West appeared to be a formality at the start of the season with the Patriots, Dolphins, and Jets all struggling early on, but a run of six-straight wins has put Bill Belichick’s side back in control of the division for now and this matchup may well be the most-anticipated MNF clash of the season.

It looks like both teams will be relatively healthy going into this, it’s an intriguing matchup that could go either way and the result is absolutely going to matter at the end of the season.

How Big a Miss is Tre’Davious White?

There’s understandably plenty of concern in Buffalo about the team’s chances this year after Tre’Davious White went down with a season-ending injury, but how important is he to this matchup? There’s no doubt that he’s one of the best CB’s in the league, but he does tend to play on the outside and that’s not an area where this New England team looks to exploit.

There’s a narrative that Buffalo’s rushing attack is fairly non-existent and that makes them more predictable, but they have averaged more yards on the ground per game than the Patriots this season. There are two caveats to this – the Pats rushed for negative yardage against Tampa Bay and around a third of Buffalo’s yardage has come courtesy of Josh Allen.

This Patriots defense has a pass rush and they can cover so turning this into a drop-back game for Allen is not a recipe for success, but Bill Belichick’s defenses have historical trouble against mobile QB’s as he tends to favor size over speed from his linebackers, and that opens up the chances for Allen to have a monster game on the ground.

Allen has thrown 10INTs this year and you know Belichick is going to have something planned for him, but Buffalo’s defense is strong enough to limit the Pats and secure the win if the Bills can play a turnover-free game.

How Legit is This Patriots Team?

This game should give us a solid answer to that question, but there are two schools of thought about this current Pats team. Yes they’ve been blowing teams away and the defense has been number 1 for most important metrics throughout that run, but they’ve also had some serious injury luck. The Titans were without Henry, Brown, and Jones, Atlanta were missing Patterson and Ridley, The Browns were without their best running backs, and as for the Panthers – well they had to play against New England with Sam Darnold at QB.

You can only beat what’s placed in front of you and the Patriots have also picked up an impressive win over the Chargers in that run, while the offense is starting to look very promising. The return of Trent Brown to the O-Line has helped to open up space for Damien Harris and Rhamondre Stevenson, Hunter Henry has 7 receiving TDs, Kendrick Bourne is starting to look dangerous and there were signs of life from Jonnu Smith against Tennessee.

Mac Jones isn’t Tom Brady and nobody will ever be, but he’s also doing a darn good impression of him with his command of the offense. The major knock on Jones is the sack count – He’s taken 24 already this season, and they tend to be big drive killers when they happen. The O-Line is solid in front of him and offers good protection, but he’s struggling to identify corner and safety blitzes, so you can be sure that Buffalo will have a few lined up to test him out.

The key for the Pats will be limiting Buffalo TD’s and turnovers, and they certainly have the ability and confidence to come out of this with the win.

This is such a tough game to call, simply because it’s a great matchup, but you also get the feeling that either team could blow the other out if they start well and get some turnovers. Buffalo have opened as the favorites, but Josh Allen is having INT issues and this is a Patriots team who love to give the ball away, while Josh McDaniels is also getting stronger with his gameplans with each passing week. It’s going to be tight, there will be lead changes, but I think the Pats may sneak it courtesy of a late Nick Folk FG.