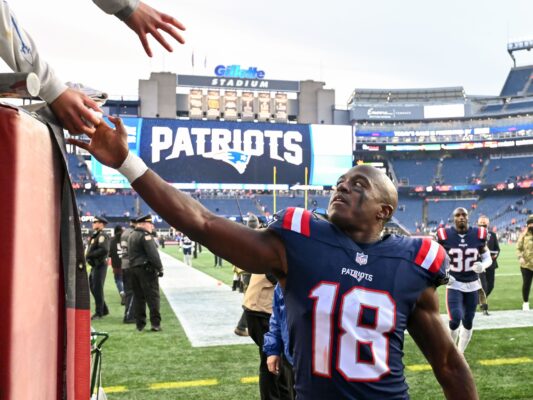 The New England Patriots started the season 2-4 before rattling off four straight wins, to put themselves not only in the hunt for a playoff berth but only percentage points behind the Buffalo Bills for the AFC East title. The Falcons, on the other hand, have struggled this season, and are coming off a loss where they were completed dominated by the Cowboys last week.

Can The Patriots Collect Their 5th Straight Victory

After starting off slow, Mac Jones and the New England Patriots have finally found their stride and have been playing the way that everyone had thought they could at the beginning of the season. The Patriots are averaging 27.5 points per game on 371.2 total yards of offense per game. Those 371.2 total yards break down to 256.7 passing yards and 114.5 rushing yards per game. As aforementioned, the Patriots’ offense is led by their rookie quarterback, Mac Jones. Jones has completed 223 of 323 pass attempts for 2,333 yards and has thrown thirteen touchdowns while tossing seven interceptions this season. When Jones isn’t throwing the ball, the Patriots look to Damien Harris to take off some of the load. Harris, who is also from Alabama, has rushed for 547 yards on 133 attempts this season with seven touchdowns.

How Much is Left in the Matt Ryan Tank?

Matt Ryan has done everything he can for the Falcons throughout his career, but his time in Atlanta is almost over. The Falcons are averaging just 19.8 points per game on 337.1 total offensive yards per game. Those 337.1 offensive yards break down to 254.2 passing yards and 82.9 rushing yards per game. Matt Ryan has completed 218 of 322 pass attempts for 2,274 yards and fifteen touchdowns while throwing eight interceptions. The Falcons don’t have much of a rushing attack per see, but when they do run the ball, they look to Cordarrelle Patterson to carry the load. Patterson has rushed for 303 yards on 77 attempts and just two touchdowns on the season.

The Patriots are finding their stride at the right time of the season while the Falcons are struggling, more on the defensive side of the ball than the offensive side, but struggling nonetheless. Look for the Patriots to continue their winning ways and collect their fifth straight win to open up week 11.