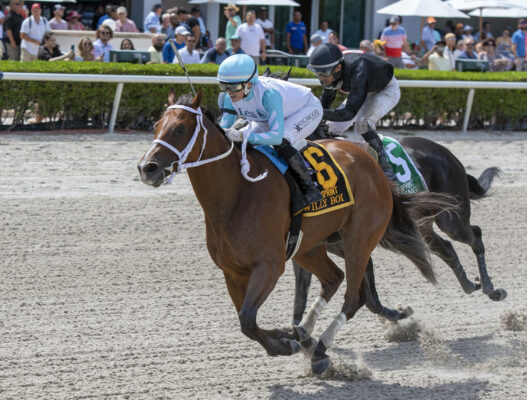 If you’re looking for the latest free horse racing picks, predictions, and odds for the Pegasus World Cup Invitational Stakes, then look no further than Vegas Odds.

One of the first big Grade 1s of the calendar year is creeping into sight, as the Pegasus World Cup Invitational Stakes takes place at Gulfstream Park on Saturday, January 28. This race offers a purse of $3 million and is the feature race of the year at the Florida track.

The Pegasus World Cup Invitational Stakes is always an exciting way to start the racing year, and there have been some legendary winners of the Grade 1. Those include last year’s winner, Life Is Good, as well as Breeders’ Cup Classic heroes Knicks Go, Gun Runner, and Arrogate.

However, this year’s race certainly doesn’t boast the same star-studded quality. Cyberknife is clearly a very deserving favorite for the Brad Cox yard. This will be his final start on track, as connections made the slightly strange decision to send him to stud following the race at Gulfstream Park, despite very open feels to the races in the UAE and the G1 Breeders’ Cup Classic later in the year.

Cyberknife is certainly bred for this race, as he is from the lineage of Gun Runner. He was last seen finishing second to Cody’s Wish in the G1 Breeders’ Cup Dirt Mile, but I believe he is better over this extended distance, which saw him win the G1 Haskell and finish second to Epicenter in the G1 Travers.

Defunded is another runner that excels over this distance, claiming victories in the G3 Native Diver and G1 Awesome Again last year. However, he is yet to come up against this caliber of opposition, which does raise questions. Proxy also won over this distance to land the G1 Clark last year, but was beaten pretty emphatically in both the G2 Stephen Clark and Blame Stakes.

I think this is a pretty poor renewal of the race, which means extra attention should be put on the outsiders. Saffie Joseph Jr is always a go-to trainer at Gulfstream, and Skippylongstocking could be over-priced after an exciting performance at Gulfstream in the G3 Harlan’s Holiday, beating Pioneer of Medina and Simplification. Get Her Number is another that can often deliver a big performance.

I have been so keen on one horse for my Pegasus World Cup Invitational Picks for a long time, and that runner is White Abarrio. The Saffie Joseph Jr runner was third in the G1 Cigar Mile last time out, but his record at Gulfstream is staggering.

This track always brings out the very best in him, and that was evident last year when landing the G1 Florida Derby and G3 Holy Bull. At present, he is unbeaten in four starts at the track. Skippylongstocking is an excellent place choice, while I struggle to see Cyberknife finishing outside the first three.