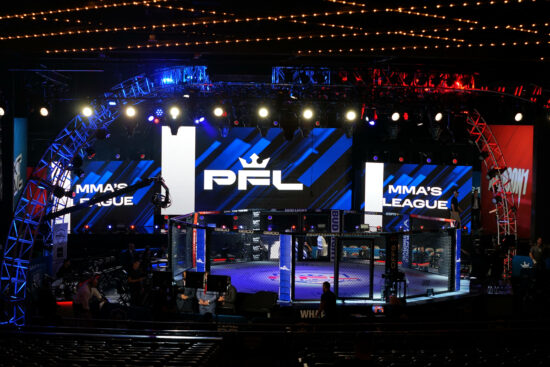 If you’re looking for some PFL Championship predictions, look no further because Vegas Odds has you covered.

It’s time for the grand finale of the 2022 season of the Professional Fighters League. The final event of the year – PFL 10 – will be held on Friday, November 25, at Maddison Square Garden’s Hulu Theater in New York.

The event brings us seven main card fights, six of which are championship bouts with $1,000,000 at stake. Knowing this, it’s clear that PFL 10 is going to be a spectacle. This is why we decided to analyze each PFL title bout and share our top picks along the way.

Australian fighter with a trademark mustache Rob Wilkinson (16-2) has a chance to get ahold of the title in his first PFL season. Before inking a deal with this promotion, he fought in events organized by many other companies, including the UFC. That’s where he suffered both of his professional MMA losses – to Siyar Bahadurzada and Israel Adesanya.

Since leaving the UFC, Razor is undefeated, but that might change on November 25. That’s when he’s locking horns with Omari Akhmetov (24-7). Wolverine is a Dagestan-born fighter who’s a member of American Top Team, training along with such legends as Glover Teixeira, Amanda Nunes, Andrei Arlovski, and others.

Akhmetov is a well-rounded fighter with UFC experience who used to fight in the middleweight and welterweight divisions. He’s three feet shorter than his Australian opponent, but we don’t think it will matter much on Friday.

Nicknamed The Swedish Denzel Washington, Sadibou Sy (12-6-3) is a fighter who’s really fun to watch. He likes to hit his rivals and is not afraid to take hits. As a result, he’s got six wins by KO/TKO, as well as two losses by this method. Even his fights that went the distance weren’t snooze-fests.

We’re sure he’s gonna put on a good show once again. He’s going to attack Dilano Taylor from the very start, aiming for an early finish. Will he pull it off? We sure think so.

After spending almost five years in the UFC, Oliver Aubin-Mercier (16-5) moved to the PFL in 2021. Since moving to this promotion, he’s undefeated with five straight wins. What’s interesting is that each of those wins happened by decision.

The result is that he now has a total of seven wins by decision, eight by submission, and just one by knockout/technical knockout. This, however, doesn’t mean he’s not a good striker. On the contrary, the fact that he’s a blue belt in Taekwondo is proof that he knows how to throw punches and kicks.

Unfortunately for him, so does his opponent in the final of the 2022 PFL Lightweight Championship. Stevie Ray (25-10) has experience with kickboxing and Muay Thai, even though his specialty is Brazilian Jiu-Jitsu.

That said, Ray has plenty of weapons at his disposal, both offensive and defensive. This is why it’s kind of strange that his Vegas odds are as long as +300. We think that Braveheart has what it takes to upset the odds next Friday.

Fast-forward to November 25, and the two are fighting again, this time in a bout that will decide the PFL Heavyweight champion for the year 2022.

Obviously, Delija is the betting favorite and there are several reasons for that. First of all, he’s already shown that he can run over Scheffel. Secondly, the Croatian also has motivation on his side. The thing is that this is going to be his second fight for the $1,000,000 prize.

The first one didn’t go as planned – Delija lost to Bruno Cappelozza in 2021 final. Speaking of the devil, the Brazilian fighter pulled out of the 2022 PFL due to an injury. Cappelozza was then replaced by his countryman Scheffel, who just isn’t as good as him.

The 2022 PFL Featherweight Championship fight is a duel between an expert striker and an expert wrestler. Brendan Loughnane (24-4) is arguably the best striker in the division, the evidence being that 50% of his wins happened by KO/TKO. He won by decision 11 times, while only one of his victories happened by submission.

This fact shows that the Englishman isn’t great on the floor. He’s not bad, but he’s nowhere near Bubba Jenkins (19-5) when it comes to wrestling. The American is a former NCAA Division I champ who’s been using his wrestling skills throughout his 11-years-long pro MMA career.

Some of his 24 MMA bouts were against fighters very similar to his opponent in the PFL 10. For example, in the PFL Featherweight Championship Semifinal, he defeated Japanese striking maestro Ryoji Kudo.

What’s also interesting is that most of Jenkins’ losses happened against good wrestlers/grapplers – Chris Wade, Ali Begov, and Georgi Karakhanyan.

The PFL 10 is headlined by the 2022 Women’s Lightweight fight between Kayla Harrison (15-0) and Larissa Pacheco (18-4), which is going to be their third fight. The previous two finished in Harrison’s favor. Both times she won by unanimous decision, which is kind of surprising knowing that her finish rate is 80%.

The obvious explanation for why she hasn’t been able to finish Pacheco is that the Brazilian is an elite fighter. Even though she’s still in her 20s, Pacheco’s been fighting professionally for more than a decade. She even has some UFC experience – before joining the PFL she fought two UFC bouts.

Pacheco did lose both of those, but that’s not such a big deal considering that her opponents were Jessica Andrade and Germaine de Randamie.

That said, Pacheco is a fighter that should be respected. Oddsmakers, however, aren’t showing their respect to Pacheco, giving the odds of +425 on her getting revenge on Friday. Although we can’t say they’re wrong to think of Harrison as the favorite in the PFL 10 headliner, we do think that Pacheco’s odds are way too long.