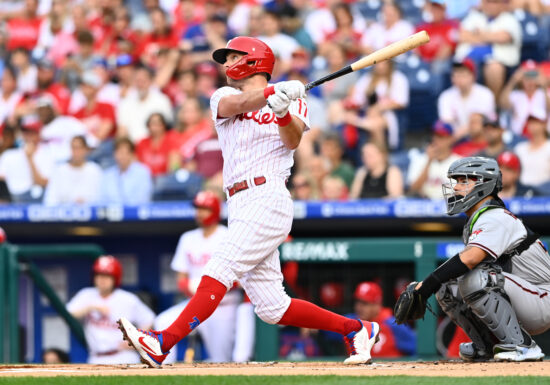 The Phillies finally returned to .500 at 29-29 after picking up their 8th straight victory. They now sit just 2.5 games out of a playoff spot.

The Diamondbacks are 2-5 over the past week after fighting their own way back to nearly the .500 mark. They currently sit 4th in the NL West at 28-32.

The Phillies won Friday’s game against the Diamondbacks 7-5 thanks to two home runs from 1st baseman Rhys Hoskins. Philadelphia has also been getting great performances from star-designated hitter Bryce Harper, who is hitting .317 with a 1.010 OPS on the season. Harper has been especially hot as of late. In the month of June, Harper has a .348 batting average with 5 home runs and a league-leading 1.451 OPS. The Phillies will look for even more hot hitting from Harper and Hoskins, as they go for nine in a row on Saturday.

On the mound for the Phillies will be Zack Wheeler (4-3, 3.14 ERA). After a rough first few outings, Wheeler has been absolutely dominant. He gave up 12 earned runs in 12.2 innings pitched in his first three starts of the season, accumulating an ERA of 8.53. In his next 7 starts, Wheeler has pitched 44.2 innings and given up just 8 runs, equivalent to a 1.61 ERA. The Phillies will look for Wheeler to continue his excellence against the Diamondbacks on Saturday.

After getting back to within just 1 game of .500, the Diamondbacks have suffered a 5-10 stretch of games. Started by getting swept at home in 4-games against their division rival Dodgers, the Diamondbacks have started to lose games in bunches. They did manage to take two out of three games against the Braves, who have since won 9 in a row. They’ll face a similarly hot team in the Phillies, who already notched a win in game 1 against Arizona to get to 8 consecutive wins of their own.

Arizona has Madison Bumgarner (2-5, 3.64 ERA) on the mound in this one. MadBum has been on an opposite trajectory as Wheeler. After pitching to a 1.78 ERA in his first 7 starts, Bumgarner has given up 18 runs in 29 innings pitched in his last 5 games, equivalent to an ERA of 5.59. The Diamondbacks will look for a bounce-back performance out of Bumgarner as they look to stop the Phillies’ streak. On offense, to support Bumgarner, the Diamondbacks are led by third baseman Josh Rojas, who’s driven in 5 runs in the last 3 games.

It’s tough to pick against any team that’s won 8 games in a row. On top of that, Zack Wheeler and the Phillies have been on fire, while Madison Bumgarner and the Diamondbacks have really struggled. Philadelphia’s streak to bound to snap at some point, but with a good pitching matchup at home, I’m not too sure it’ll happen here. I like the Phillies to win this one with confidence.